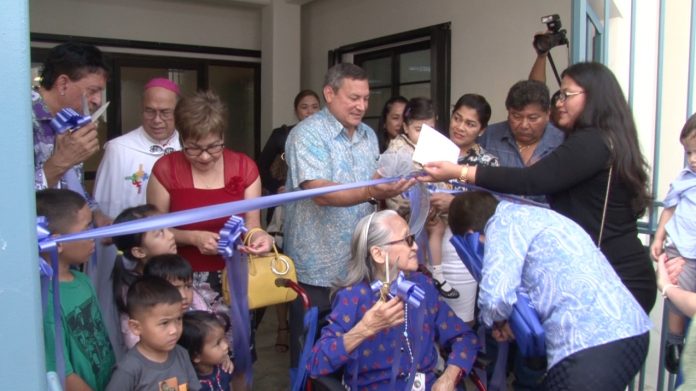 The renovations began in August 2014 and were funded through a $1.5-million grant from the Department of Interior.

Guam – For the first time since its opening in 1949, the Nieves Flores memorial library received much needed renovations.

Governor Eddie Calvo, first lady Christine Calvo, and Speaker Judi Won Pat as well as other stakeholders gathered to celebrate the grand re-opening of the memorial library. The renovations began in August 2014 and were funded through a $1.5-million grant from the Department of Interior. The renovations include a brand new wing as well as separate study rooms for young adults and one for adults. Additionally, the library houses an Internet cafe. Gov. Eddie Calvo says that this ribbon cutting is one of many to come in the following months. The ribbon cutting for the memorial library is part of the revitalization of Hagatna ahead of the Festival of Pacific Arts.

“For many many years we’ve come through not only at this main facility in Hagatna but also our library systems in Dededo and Agat. We all work together with the same purpose, which is to continue the growth of our children’s knowledge through books and through learning,” said library board member Kyle Mandapat.

Gov. Eddie Calvo on the importance of the libraries renovations says, “It’s also an exciting time especially for Hagatna. With this ribbon cutting and so many others going on in the coming weeks and months ahead, we have the revitalization of Hagatna. Fest Pac will be happening here in a couple of months where we showcase our trophy capital city to most of the representatives of the people of the Pacific Islands.”