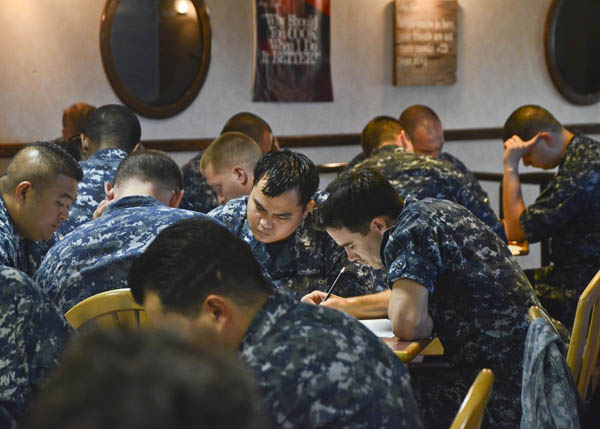 The written exam is the first step to becoming a chief petty officer in the U.S. Navy, a position rich with history and tradition.

“There is a lot of heritage that goes with being a chief and a lot more responsibilities,” said Chief Boatswain’s Mate Allen Hawthorne, one of the exam proctors. “I was a first class for 10 years, and making one more rank was one of the biggest changes”.

There were many different opinions on the difficulty of the test. Some found the test a breeze while others struggled through it. Many have taken the CPO exam multiple times.

“It fluctuates; it’s hard sometimes and sometimes it’s easier depending on how much I study and why I study,” said Engineman 1st Class Floyd Johnson. “It gets discouraging at times especially when you get the results and they’re not what you expected, but it just gives me that much more motivation to keep on studying and try to make it the next time.”

And while the test experience might be different for some, they all agreed that when it comes to studying for the exam, using the bibliographies (BIBS) is the most important step.

“I printed out the BIBS, went through it and stuck to the basics. I keep it simple by going to each manual, doing question and answers,” added Johnson regarding his study habits.

Navy Diver 1st Class Bobbie Lee McClain also took the test and looks forward to becoming a Master Diver, which she will be eligible for only after being a chief for two years.

“People look up to chiefs, especially if they’re good chiefs, but for me the biggest part about it is that it is a big step toward my ultimate goal,” said McClain.

Some will make it to the next phase of the CPO advancement process and some won’t. McClain, who’s taken the test three times, had some advice for those who will have to do it again next cycle.

“I always advise people that even if you don’t think you’re going to make it, you should always strive to make board,” said McClain. “You never know.”

Frank Cable, forward-deployed to the island of Guam, conducts maintenance and support of submarines and surface vessels deployed in the U.S. 7th Fleet Area of Responsibility.