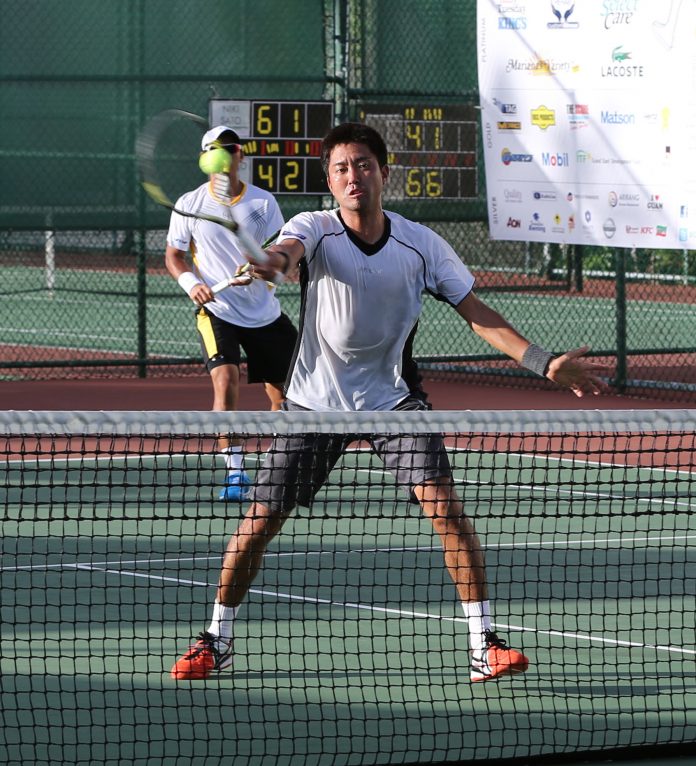 Guam –  In last year’s doubles final, Bumpei Sato triumphed with partner Yasutaka Uchiyama over Takuto Niki and Yuichi Ito – this year, Sato has teamed up with Niki to defend the doubles title in the 2014 Delta Guam Futures presented by Docomo Pacific and Hilton Guam Resort & Spa at the Hilton tennis courts.

Sato and Niki, the No. 1 seeded doubles team, edged No. 3 Katsuki Nagao and Hiromasa Oku 6-3, 3-6, 10-7 to set up a finals meeting with the unseeded tandem of Yuuya Kibi and 16-year-old Tomohiro Masabayashi. Kibi/Masabayashi came back from near defeat in the second set to overcome No. 4 Gengo Kikuchi and Shunrou Takeshima 4-6, 7-6(7), 10-4. En route to the final, Kibi/Masabayashi also managed to upset the No. 2-seeded team of Jeevan Nedunchezhiyan and Hung Jui-Chen in the quarterfinals.

[Takuto Niki plays a forehand volley at the net as partner Bumpei Sato gets in position to cover him against No. 3 Katsuki Nagao and Hiromasa Oku in a semifinal doubles match of the 2014 Delta Guam Futures presented by Docomo Pacific and Hilton Guam Resort & Spa at the Hilton tennis courts. Sato/Niki won 6-3, 3-6, 10-7]

“Doubles is always close – you’ve seen it in some of the other matches and you saw it in this match, we won 10-7 in the last set,” Sato said after his semifinal doubles match with Niki. “This is only the second time (Niki) and I have teamed up to play doubles, but I feel that we’re very comfortable playing as a team together. We played in a Challenger tournament before, and although we lost in the main draw that time, we felt that we made a good combination – we trust each other on the court.

“We’re going up against a good team with a good junior player – (Masabayashi) is kind of a dangerous player now, since he and his partner beat some experienced doubles players,” added Sato, who hails from Tokyo. 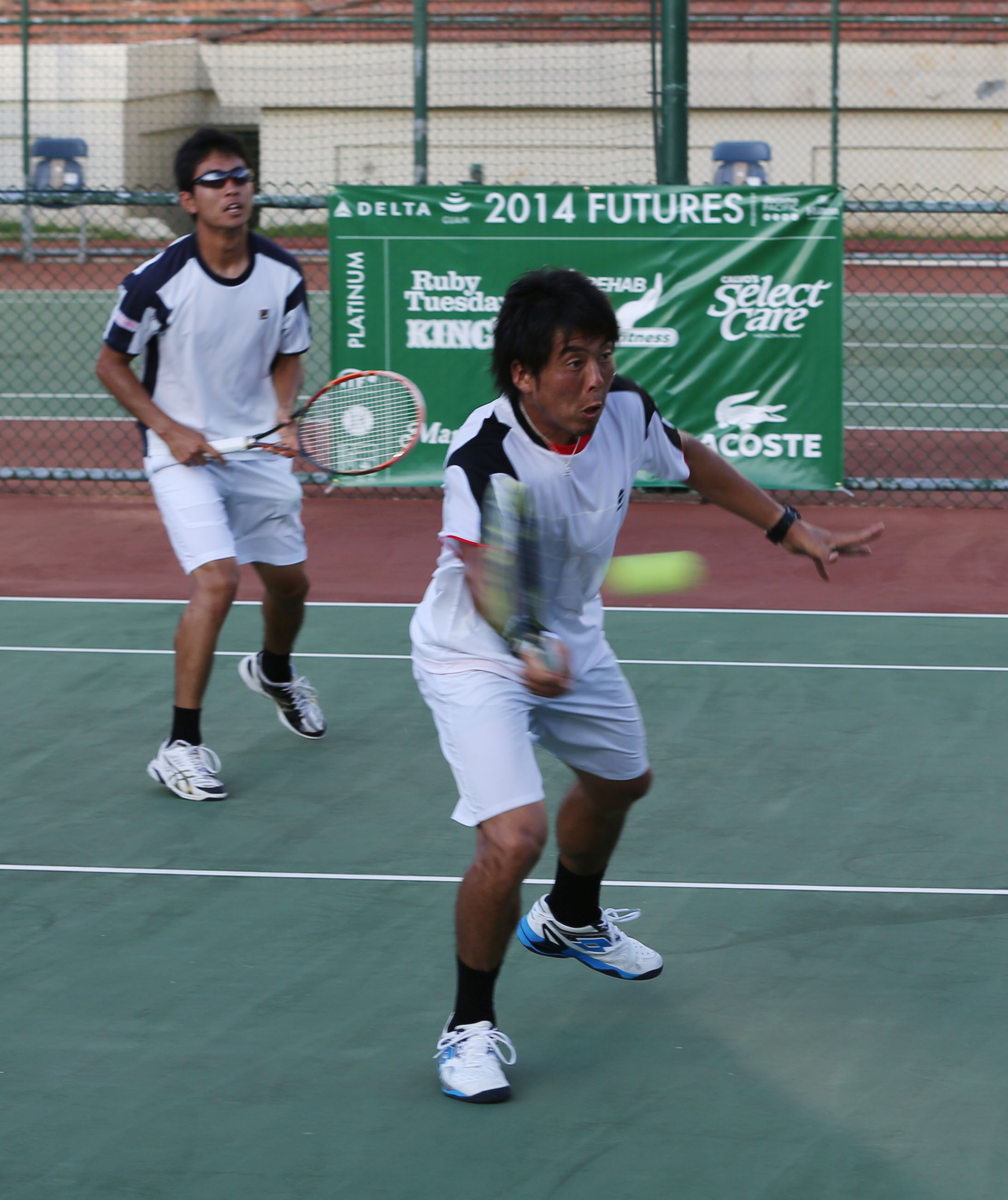 The doubles final is scheduled for mid-afternoon, not before 2 p.m. at the Hilton tennis courts. Before Sato and Niki team up for the doubles final, the pair will play against each other in a singles semifinal at 11 a.m.

“We’re always happy when we play good tennis – if I win the singles match, that’s great, or if (Niki) wins, that’s also great, but when it comes to doubles, it’s different,” Sato said. “We are a team and we don’t mix it up (with our results from singles). I actually would like to win the doubles title more.” 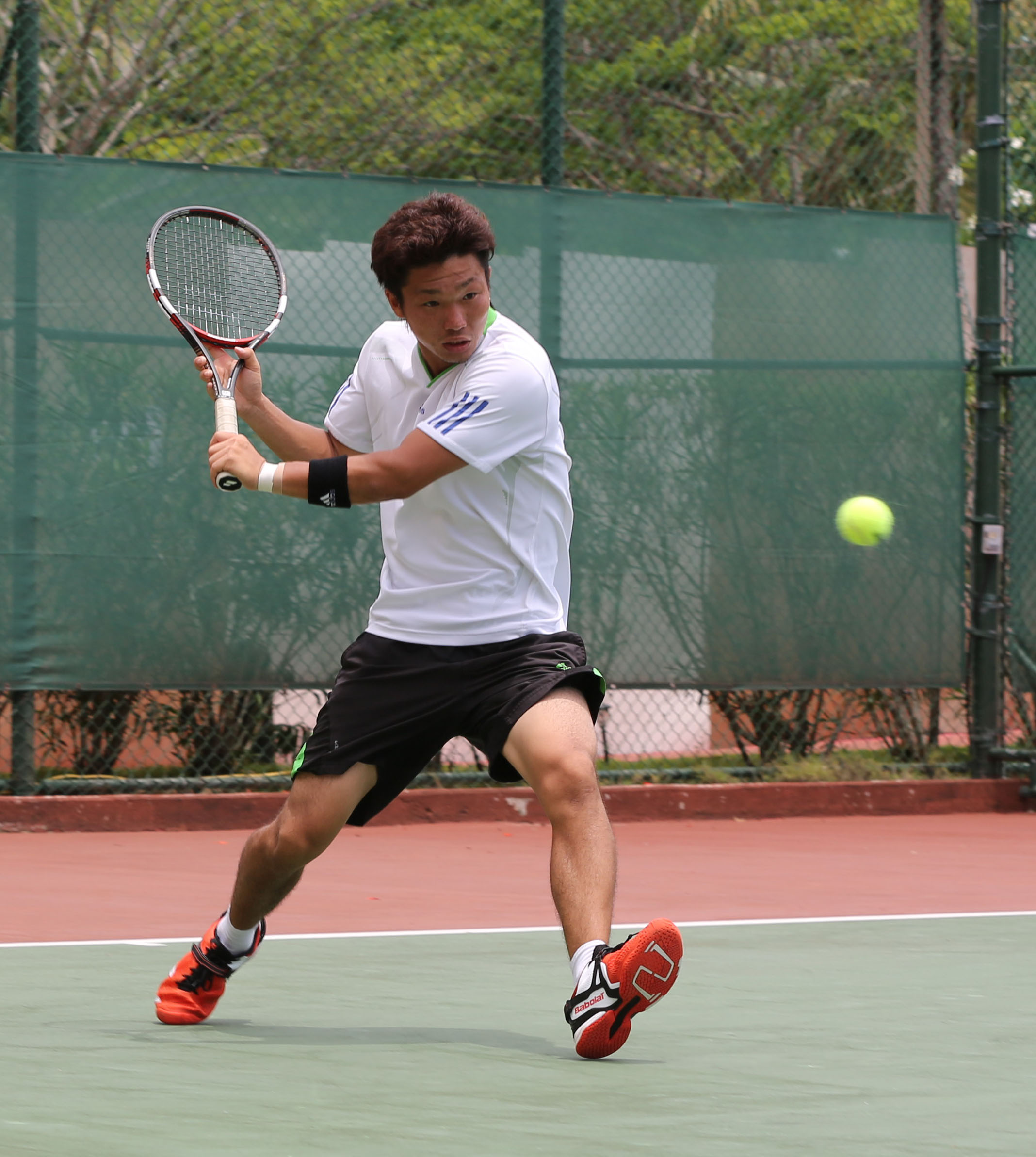 [Japan’s Ko Suzuki, the lone unseeded singles quarterfinalist, makes his way to the net for backhand volley against No. 4 Bumpei Sato in a quarterfinal singles match of the 2014 Delta Guam Futures presented by Docomo Pacific and Hilton Guam Resort & Spa at the Hilton tennis courts. Sato won 6-4, 6-1.]

Nedunchezhiyan will play Kibi at 10 a.m. at the Hilton tennis courts to start Day 5 of the professional tournament.

Updated draws and the order of play are posted at the Hilton tennis clubhouse and also online on the Guam National Tennis Federation Facebook page, facebook.com/GuamTennis