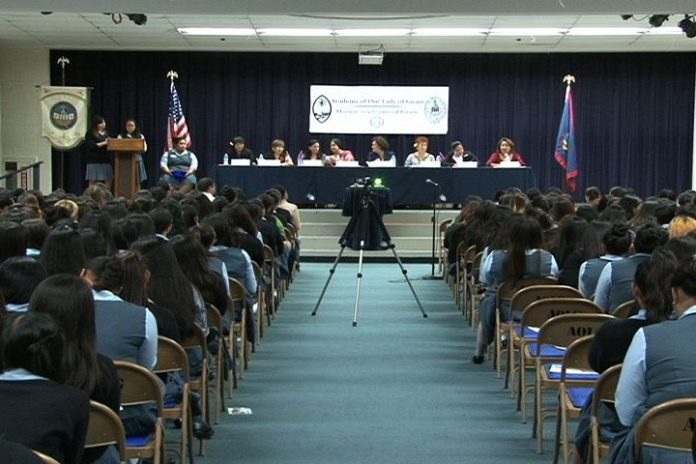 Academy of Our Lady of Guam hosts an all-female senatorial candidate forum.

Guam – It was a forum with no boys allowed. From medical marijuana to domestic violence, female senatorial candidates were engaged in a forum hosted by students at the Academy of Our Lady of Guam.

On the question whether she would support lowering the voting age to 16 or 17, Yamashita said before exploring that topic, she would like to address the issues that prevent 18 year-olds from registering to vote.

Cristobal said the “strongest issue on her platform” is the contamination of sites around Guam with toxic waste that could be contributing to the rise in cancer rates on island.

Guthertz was asked about her stance on increasing penalties on crimes against women, to which she replied, “Lock ’em up and throw away the key.” Guthertz encouraged the high school students to urge judges to sentence criminals to longer prison terms.

The female candidates were also asked to give simple yes or no answers on questions widely talked about today, such as medical marijuana and Chamorro self-determination.

The candidates were asked whether they support the medical marijuana referendum. Won Pat, Torres, Yamashita, Cristobal, Guthertz and Barnes all answered yes. Taitano and Underwood answered no.

On whether they support self-determination, all of the female candidates answered yes.

The forum was put together by seniors in the AP American Government and Politics class.