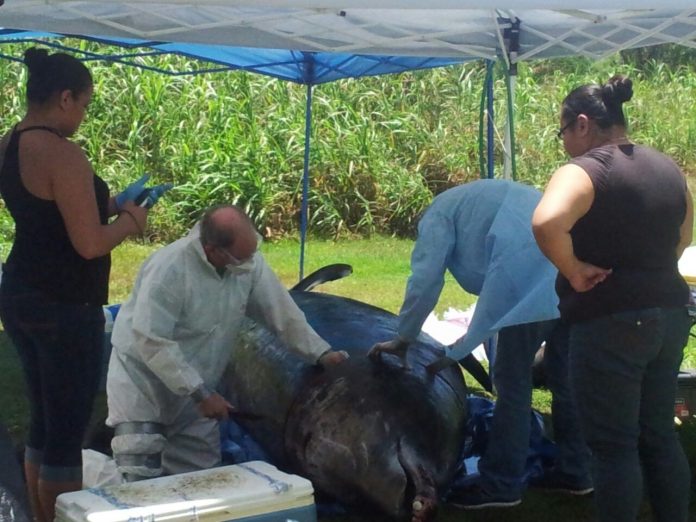 Guam – The National Oceanic and Atmospheric Administration has not been able to determine the cause of death for two whales who stranded on Guam last year.
One Cuvier beaked whale that stranded in Merizo on March 23rd of 2015. Another Cuvier beaked whale stranded on July 26th of 2015 in the village of Agat. According to NOAA regional Marines Mammal Response Program coordinator David Schofield the Necrospy of the whale that stranded in Merizo showed a severe parasitic worm infestation in the whale’s kidneys. However, this was not determined to be the cause of death. The whale also showed negative results for the morbillivirus which is a disease of concern for whales and dolphins. According to Schofield “the cause of death could not be determined.” The Cuvier beaked whale that stranded in Agat on July 26th of 2015 was too decomposed to do much testing. Schofield says that due to decomposition organs were no longer identifiable at necropsy and “histopathology was not conducted for this whale” which means that the tissues were too decomposed to allow for morbillivirus testing. Thus the cause of death could not be determined for the second whale either.
Some in the community have brought up concerns that the whale strandings could be caused by Navy sonar. According to news files a local dive tour employee recorded what sounded like sonar pings the morning of the March whale stranding in Merizo. The U.S. Navy has admitted in it’s MITT Draft EIS that some beaked whale strandings are believed to be caused at least in part by Navy sonar. Navy Public Affairs Officer Lt. Tim Gorman previously confirmed for PNC that sonar was used by Navy ships that were conducting exercises on the morning of the whale stranding.

READ THE SUMMARY OF BOTH WHALE NECROPSIES PROVIDED BY NOAA BELOW:

The Cuvier’s beaked whale that stranded on 3-23-15 in Meriza, Guam was initially reported as alive stranded prior to dying on the reef flat. The animal was transported by boat trailer and held on ice overnight prior to a necropsy conducted on 3-24-15 by Valerie Brown (NOAA) and Brent Tibbats (Guam DoAg) in video consultation, via Skype, with Hawaii Pacific University cetacean biologist Dr. Kristi West. The 4.8 m whale was an adult male with 2 blunt teeth. A severe Crassicauda infestation was noted in the kidneys of the whale. Stomach contents included undigested and partially digested deep water shrimp as well as squid beaks. Morbillivirus (a disease of concern in cetaceans) testing was negative from several tissues analyzed from this individual. Cause of death could not be determined.   The Cuviers’ beaked whale that stranded on 07-26-15 in Agat, Guam was initially reported dead on the reef flat and was not accessible for transport until days following the initial report. Currents moved this whale towards a boat channel where it was then recoverable and transported for necropsy. Stomach contents were recovered at necropsy, but due to decomposition, organs were no longer identifiable at necropsy and histopathology was not conducted for this whale. Tissues were too decomposed to allow for morbillivirus testing. Cause of death could not be determined.