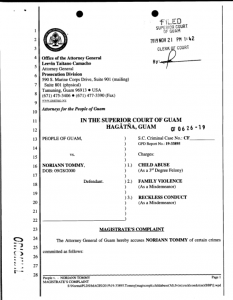 The woman seen in a viral video dangling a child from a second-floor balcony has been identified as 19-year-old Noriann Tommy. The child is her 2-year-old daughter.

So, according to the complaint, Tommy told police she held her daughter “over the balcony to stop her from crying.”

The report states the child “in fact, stop(ed) crying.”

Guam police arrested Tommy on allegations of child abuse, family violence, and reckless conduct. She is now confined at the Department of Corrections.

Sgt. Tapao says that Child Protective Services was “contacted and apprised” of the case which has now been forwarded to the Attorney General for prosecution.