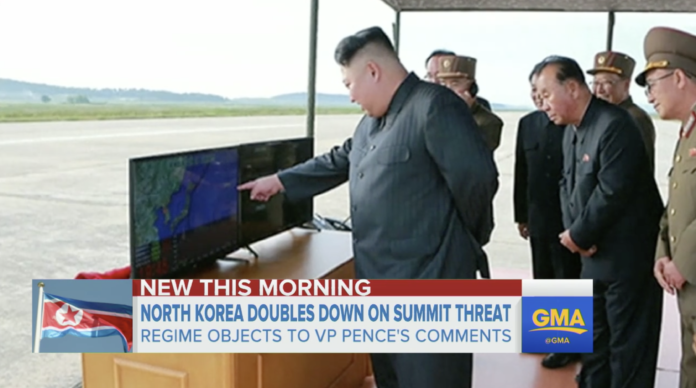 News of President Trump’s cancellation of the June 12th Singapore summit with North Korea’s Kim broke as the House was readying to pass its annual NDAA, key for the continued Guam buildup and island security.

Secretary of State Mike Pompeo read from the president’s letter to Kim at a Senate Foreign Relations hearing.

“The world, and North Korea in particular, has lost a great opportunity for lasting peace, and great prosperity and wealth. This missed opportunity is a truly sad moment in history, sincerely yours, Donald J. Trump, President of the United States of America,” Pompeo quoted.

President Trump blamed the “tremendous anger and open hostility” in Kim Jong Un’s latest nuclear threat against the US this week.

While Trump held out the possibility of a future meeting with Kim, the specter of renewed tensions with the despotic North Korean regime is not good news for Guam which has been threatened repeatedly by Kim.

Guam Congresswoman Madeleine Bordallo has cited the threats to win a permanent basing of the THAAD missile defense system on island and continue build-up momentum. She urged the House last year to condemn North Korea’s actions.

“This threat, Mr. Speaker, against Guam, and indeed our entire nation, was inexcusable … and it demands firm condemnation from this House of Representatives. I remain fully confident in the defensive capabilities on Guam and in our region. But it is vital that we do all that we can to prevent a military conflict with North Korea,” Bordallo declared.

Bordallo was en route back to Guam when the summit cancellation story broke, but the ranking Readiness panel Democrat’s Guam H-2B, Navy land return and ship repair provisions were already embedded in the NDAA the House passed by 361-66.

The House bill authorizes some $37 -million in buildup work, including $83-million for phase three of Andersen Air Force Base replacement housing.

The Senate Armed Services Committee was still writing its NDAA.

Bordallo, meantime, succeeded in amending the House bill to give American firms preference for telecom services on military bases in the states and territories.