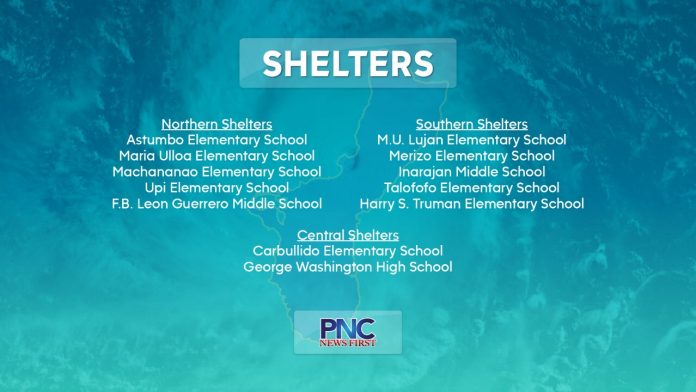 Guam – As the clock struck midnight northerners quickly filled GDOE Emergency Storm Shelters, with Astumbo Elementary at 92%. However, a mere 30 minutes past 12am, Astumbo Elementary could no longer accept residents, filled to its brim.All Guam Department of Education Emergency Storm Shelters opened  at 6pm Sunday, with northern locations being the most sought out by residents. By 12:30am, Sunday, Astumbo Elementary School was no longer able to accept residents. Also by then, another northern shelter Machananao Elementary was nearing its maximum capacity at 95% filled. Not too far behind was F.B. Leon Guerrero Middle School at 85%. Currently, northern residents are urged to go directly to the 3 other shelters within their area – Juan M. Guerrero (16%), M.A. Ulloa (66%) and Wettengel Elementary (26%).

Residents who live in substandard housing or in areas prone to flooding are urged to seek emergency storm shelters near you. Should you have issues with transportation you are encouraged to contact or visit your respective village Mayor’s Office who will be providing bussing to and from shelters.

As of 1am this morning Typhoon Mangkhut was located 15.0N 149.9E – 280 miles east of Saipan and 350 miles east-northeast of Guam with maximum sustained winds currently at 85 mph. Destructive winds of 74 mph or more are anticipated for Guam as early as Monday afternoon.  In response to Typhoon Mangkhut and it’s current track westward,  Governor Calvo will be placing Guam in Condition of Readiness (COR) 1 by 4am this morning, which means damaging winds of 39mph are expected within the next 12 hours.

Monitor the storm with PNC News First through hourly updates to be broadcasted on FOX6 and ABC7. Updates will also be made available online  pacificnewscenter.com, Facebook and Instagram.