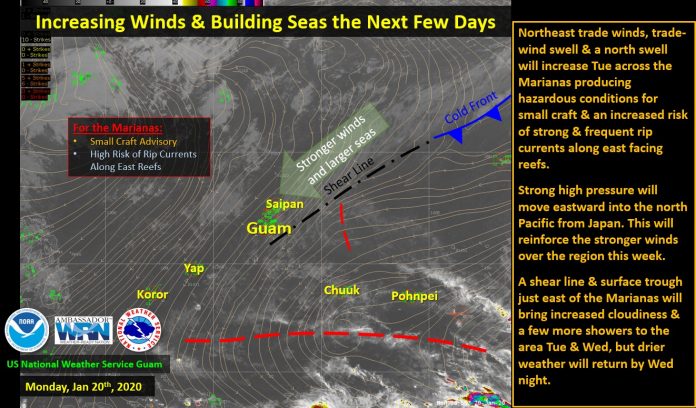 The National Weather Service Office in Tiyan has issued an airport wind advisory through tonight, a high surf advisory remains in effect until Thursday morning, and a small craft advisory has been extended until Saturday.

The NWS has also issued a high risk of rip currents warning that will last through the weekend.

“Seas and winds will increase the next several days as a shear line lingers in the area and high pressure builds in over the North Pacific.”

“Surf along east facing shores will reach up to around 9 feet, producing larger, stronger and more frequent rip currents.”

“Currently, there is NO Hazardous Surf Advisory, but we will be watching a long-period north swell and the building trade-wind swell this week in case surf does approach hazardous levels.”

“As always, practice safety when considering any type of water activity: have a personal flotation device with you and use the buddy system.”

Airport Wind Advisory: In effect for the Guam International Airport until 7 p.m. Winds at 15 to 18 knots with gusts to near 29 knots are expected from the northeast. Be alert and take precautions as needed.

High Surf Advisory: In effect for Guam, Rota, Tinian, and Saipan until 6 a.m. Thursday. Building trade-wind swell will cause surf to increase through the week. Large breaking waves of 7 to 9 feet are expected along north-facing reefs.

Small Craft Advisory: Remains in effect for the coastal waters of Guam, Rota, Tinian, and Saipan until 6 p.m. Saturday. Northeast winds of 15 to 25 knots and combined seas of 8 to 11 feet will produce hazardous conditions for small craft. Inexperienced mariners, especially those operating smaller vessels, should avoid sailing in these conditions.

High Risk of Rip Currents: In effect for Guam, Rota, Tinian, and Saipan through late Sunday night. Rip currents are powerful channels of water flowing quickly away from shore. Dangerous and frequent rip currents are expected along north and east-facing reefs.

Rip currents can sweep even the best swimmers away from shore into deeper water.

If caught in a rip current, relax and float. Do not swim against the current.

If able, swim parallel to the shore and back toward the beach when possible. If unable to escape, face the shore and call or wave for help.