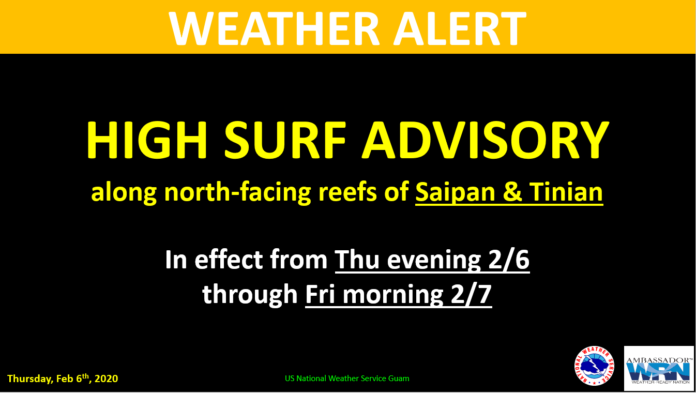 The National Weather Service office in Tiyan advises that there are northwest to northeast swells in the seas around us which are producing hazardous surf across the Marianas.

The following advisories remain in effect:

A high surf advisory is in effect for Guam, Rota, Tinian, and Saipan through Friday. Hazardous surf of 6 to 9 feet this morning will build to between 8 and 10 feet Wednesday along north facing reefs.

A high risk of rip currents is in effect for Guam, Rota, Tinian, and Saipan through Friday. Rip currents are powerful channels of water flowing quickly away from shore. Dangerous and frequent rip currents are expected along north and east facing reefs.

Do not venture near reef lines along north and east facing reefs.

If you become caught in a rip current, remain calm. Stay afloat while waiting for help.

If you have to swim out of a rip current, swim parallel to shore, then back toward the beach when possible. Do not attempt to swim directly against a rip current because you will tire quickly.