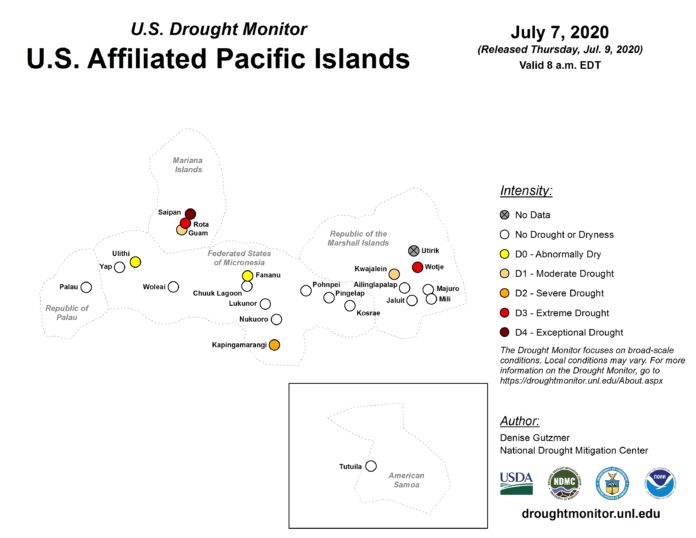 Very dry conditions continue across the Marianas despite the passage of several tropical upper tropospheric trough (TUTT) cells, according to the most recent drought statement from the National Weather Service in Tiyan.

These westward-moving upper-level disturbances have passed near or just north of Saipan, triggering some showers across Saipan and Tinian, but still below average rainfall has been received.

However, easterlies were just enough to push this weather offshore to the west, allowing for below-average rainfall over the island.

Rainfall remains below adequate for Guam and the CNMI despite TUTT cells passing near Saipan and island-effect thunderstorms near Guam.

Little change is expected in the next couple weeks with much-needed deep tropical moisture keeping well to the south. 10-day rainfall totals for Guam and the CNMI are consistent around 1.5 inches.

Officials across the CNMI report water levels are still above  thresholds for concern.

Favorable upper-level conditions and/or island-effect convection with light winds will be key to locally higher rainfall in the coming weeks. Otherwise, a relatively dry pattern will persist across the Marianas.

Agricultural impacts still persist across the northern Marshall Islands and the CNMI.

The wildfire risk is still high across Tinian and Saipan.

Residents of Kapingamarangi report household water tanks are around 25% capacity.

Residents of Wotje in the Marshall Islands report water tanks around 50% capacity.