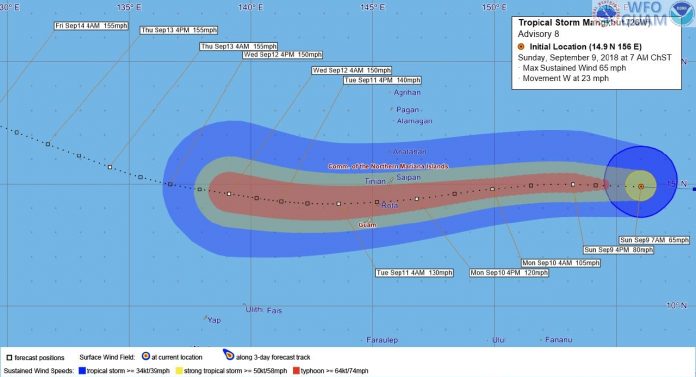 Guam – The sun is shining and the skies are clear but dont be fooled take the time today to prepare for the onset of tropical storm Mangkhut which is anticipated to reach its closest point of approach on Monday night to early morning on Tuesday, September 11.

As of 10 a.m., Mangkhut continued to intensify and is forming an eye, as it heads towards the Marianas. Currently Guam is in condition of readiness 3 which means damaging winds of 39-57 miles per hour are expected within 48 hours. Yes, folks this means that we may begin feeling the effects of the impending storm on Monday.

The storms location at 7 am was 700 miles east of Guam and will continue its west-northwest track becoming a typhoon later today or tonight.

National weather service meteorologist Landon Adylett, says the storm intensified has to 65 mph and has slightly shifted towards the north with the current track passing over Rota but we are not out of the woods as storm effects can be felt 150 miles from the eye.

NWA says as long as the storm is on the east it still has time to make changes in its track and remains a credible threat to Guam and CNMI. He says to prepare for a category 3 typhoon and to finish storm prep before sunset on Monday to be ready to hunker down.

Meanwhile the Joint Information Center still anticipates the storm to intensify into a category 4 typhoon with maximum sustained winds of 130 to 156 and gusts up to 198 miles per hour JIC urges the community to prepare for the worst and that is a category 5 typhoon.

It has been nearly two decades since Guam has seen a typhoon of this magnitude so get ready and secure your property today. Board up windows, stock up on can foods, water, gas, and be sure to charge your batteries because this storm can take us into Tuesday night. Get your flash lights and candles ready you don’t want to be left in the dark, have a secure land line phone and a first aid kit on hand in case of an emergency.

If your home is not adequate and you are unsure if it will withstand typhoon strength winds make your way to the nearest shelter. Shelters will open on Monday they include Astumbo elementary, Maria Ulloa, Machananao, Upi elementary and FB Leon Guerrero middle school in the north. Central shelters have been designated as Carbillido elementary and GW high school. For the south MU Lujan, Merizo elementary, Inarajan elementary, Talafofo, and Harry s Truman elementary schools will also be taking in shelterees.

You will need to bring identification, bedding such as blanket, and pillows, enough food and water for at least three days.

As of today, there will be no school on Monday for GDOE and Catholic school students. It’s been awhile Guam and Tropical Storm Mangkhut has the potential to be devastating for those who are unprepared.

For all your latest updates stay tuned to PNC News First on Fox 6, ABC 7 and Newstalk K57.  You can also get the latest on PNC’S Facebook, Instagram and Twitter. Together we will ride out the storm.