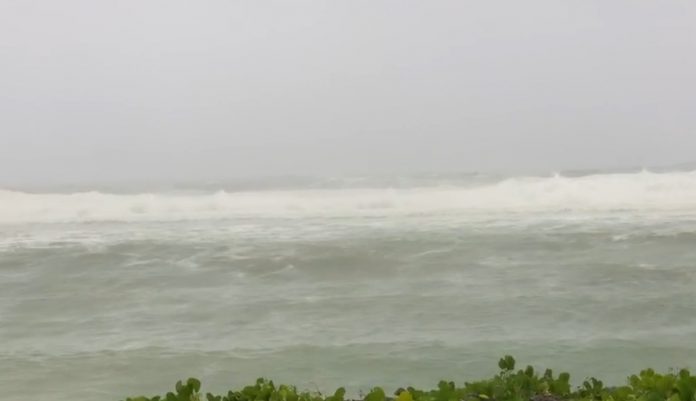 High surf and small craft advisories remain in effect for the Marianas in the wake of  Tropical Storm Kammuri which is now a typhoon headed towards Luzon.

The Offices of Guam Homeland Security and Civil Defense advises residents and visitors to avoid hazardous seas, until conditions subside. Heed the advice of lifeguards, beach patrol flags, and signs.

The National Weather Service in Tiyan has extended the current High Surf Advisory for Guam, Rota, Tinian, and Saipan through next week Tuesday.

As of this morning east facing reefs were experiencing hazardous surf between 10 to 13 feet. That should fall to below hazardous levels this afternoon.

For west facing reefs, surf is expected to become hazardous at 8 to 10 feet this afternoon.

For south facing reefs, surf is expected to become hazardous at 7 to 9 feet this afternoon by tonight.

There is a high risk of rip currents through Saturday.

Rip currents are powerful channels of water flowing quickly away from shore.

If caught in a rip current, yell for help. Remain calm and stay afloat while waiting for help. If swimming out of a rip current, swim parallel to shore and back toward the beach when possible. Do not attempt to swim directly against a rip current. Rip currents are life threatening.

A Small Craft Advisory remains in effect for the coastal waters of Guam, Rota, Tinian, and Saipan.

South winds of 15 to 20 knots with gusts to 25 knots today will diminish to 10 to 15 knots tonight. Combined seas of 10 to 12 feet will diminish to 9 to 11 feet tonight. This will produce hazardous conditions to small craft. Inexperienced mariners, especially those operating smaller vessels, should avoid sailing in these conditions.

GHS/OCD has received inquiries about any other disturbances in the area.

NWS advised a weak tropical disturbance near Kosrae remains loosely organized and does not look like a likely candidate for significant development at this time.