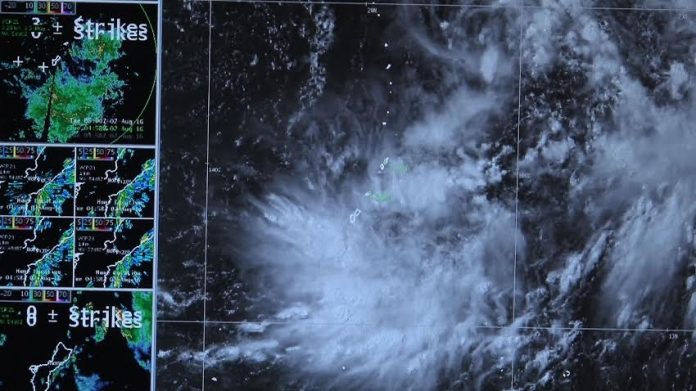 Guam – It looks like the heavy rain will last for a few more days and the National Weather Service is expecting next week to be rainy as well.

Thursday morning the NWS issued an advisory for the Marianas in light of this monsoonal weather. They issued an urban and small stream flood advisory for poor drainage areas. They advised residents and visitors to not attempt to travel across flooded roads as water can cause vehicles to stall and leave drivers stranded. A small craft advisory is in effect for Guam Rota Tinian and Saipan coastal waters until 6am on Saturday as winds of 15 to 25 knots with stronger gusts are expected through Friday night. Seas of five to seven feet have been reported and this may increase to 10 feet by Friday.

“The initial period of light scattered showers would be up until maybe Friday night but then the computer models keep us in the Southwest winds all the way through mid month all the way through next week or so and some of the models do suggest other circulations forming along the monsoon trough and that might bring on and off rain showers so it’s probably gonna be an on and off rainy first half of the month,” said NWS Forecaster Mike Ziobro.

Inexperienced mariners should avoid sailing in these conditions the Offices of Guam Homeland Security and Civil Defense are also reminding everyone who goes near the ocean to be careful.

Enforcement of COVID directives starts today with fines ranging from $100 to $10,000

DOC confirms death of corrections officer due to COVID-19

Enforcement of COVID directives starts today with fines ranging from $100...

Salvation Army gives out ‘balutan’ food in lieu of its traditional...

To date, there have been a total of 6,705 official

The Port Authority of Guam held a tribute in honor