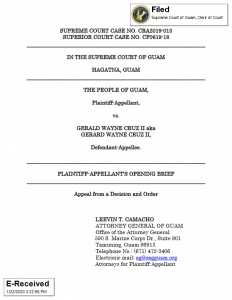 In a brief filed Wednesday with the Supreme Court of Guam, the Office of the Attorney General (OAG) detailed why it believes the Superior Court of Guam made a mistake when it dismissed felony animal abuse charges against Gerald Wayne Cruz II.

The case arises out of allegations that Cruz used a .22 caliber rifle to shoot, seriously injure, and kill a family pet named Pugua and a neighboring cat.

“It is unacceptable for anyone to shoot, beat, poison or kill an animal,” said Attorney General Leevin Taitano Camacho in the release.

It is a felony crime under Guam law to cause serious physical injury to, or to cruelly cause the death of, an animal. Cruz was initially charged with cruelly causing Pugua’s death but the trial court dismissed those charges.

The trial court found that even if Cruz shot Pugua and the cat, he did not do so in a cruel manner. The trial court held that it was “difficult to think of a less cruel way to kill an animal than by death by gunshot.”

The OAG then charged Cruz with felony animal abuse, alleging that he caused serious physical injury to Pugua based on evidence that Pugua likely suffered excruciating pain before he died. The trial court again dismissed the charges, holding that the OAG could not charge Cruz with causing serious physical injury to the animals because the animals died.

Assistant Attorney General Alysa Draper-Dehart and Senior Law Clerk Jessica Lee are assisting in the matter for the OAG.