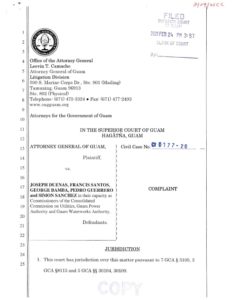 At that session, the commissioners discussed and decided on a $28,000 raise for a Guam Waterworks Authority interim general manager.

The OAG alleges the commissioners were entrusted with ensuring they would manage public funds in the interest of the people of Guam and they violated their duty of care.

This case comes after the OAG and the Office of Public Accountability announced a partnership to tackle the misuse of government funds.

An OPA audit reported the CCU violated the Open Government Law at least 31 times when giving salaries and bonuses to employees.

The OPA recommended that the CCU take corrective action to seek repayment of the funds.

Instead, the CCU held a special meeting to retroactively approve the bonuses and raises it had given in the closed meeting.

Their special meeting resulted in the status quo.

“In order to regain the public’s trust in our government, we can’t treat repeated violations of our laws as ‘business as usual’,” said Attorney General Leevin T. Camacho. “We will
hold people who violate our laws accountable, which despite being a last resort, will sometimes require taking these matters to court.”

In 2019, the media reported that the CCU discussed and decided on employee salaries and bonuses in a closed-door, executive session on November 27, 2018. The OAG reviewed the meeting minutes and found that the CCU’s actions violated Open Government Law.

In a written letter, AG Camacho advised the CCU that the salary adjustments were void and any payments made must be paid back.

The OAG subsequently requested an audit of all autonomous agencies’ unclassified employee pay raises and bonuses. In response, the OPA analyzed staffing patterns for 16 autonomous agencies covering the period from October 2014 through September 2018, finding that the Guam Power Authority, GWA, and the Port Authority of Guam issued the most employee salary increments during this period. The Performance Audit on the CCU was issued in December 2019.

The OPA continues to conduct audits and the OAG continues to assess what remedies are available, to include civil, criminal, or administrative action.