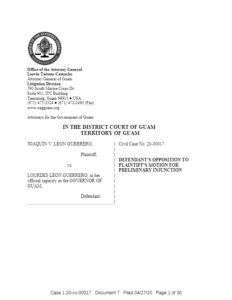 The Office of the Attorney General maintains that Governor Leon Guerrero has implemented reasonable emergency measures based on her authority under the Organic Act and Guam law to protect the community during this public health crisis, including closing Guam’s roads.

In a release to the media this afternoon the OAG cites a 1905 ruling from the U.S. Supreme Court addressing the executive powers of the then Governor of Massachusetts to mandate vaccines during the smallpox epidemic.

The high court’s decision stated – “The bottom line is this: when faced with a society-threatening epidemic, a state may implement emergency measures that curtail constitutional rights so long as the measures have some real or substantial relation to the public health crisis and are not beyond all question, a plain, palpable invasion of rights secured by the fundamental law.”

The OAG’s release cites the U.S. District Court’s decision last week to deny Ken Leon Guerrero’s request to immediately stop road closures because he failed to show that he would suffer an “immediate and irreparable injury.”

Leon Guerrero then asked for a preliminary injunction, or court order to stop the government from closing roads, because he “does not like leaving [his] house before 9:00 a.m.” and did not want to take an alternate route to avoid the road closures.

The OAG has responded by arguing that Leon Guerrero is still not suffering an irreparable injury and even if he were, the public’s interest in preventing the spread of COVID-19 outweighs the harm Leon Guerrero claims to have suffered.