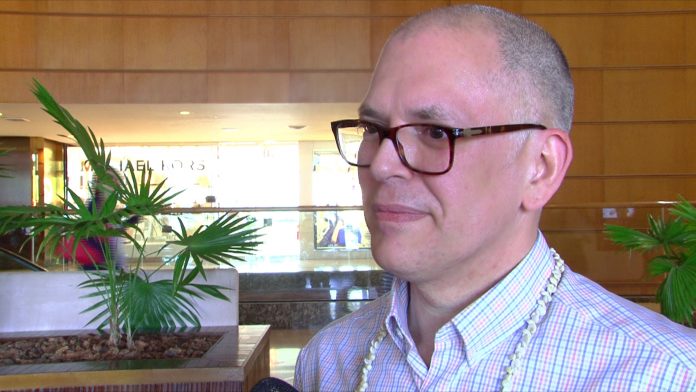 Jim Obergefell’s is the face of the fight for marriage equality for the entire nation. His case went before the US Supreme Court last month.

Guam – His name will likely go down in history and will be the subject of case law and textbooks for many years to come. And now, at the invitation of the University of Guam, Jim Obergefell will be one of two commencement speakers at their graduation ceremony this weekend.

Obergefell’s case, Obergefell vs Hodges, was heard just a few weeks ago before the US Supreme Court. A decision on marriage equality is expected by the end of June. Obergefell shares with us the experience he had when the justices heard his case.

PNC asked Obergefell what his message to Governor Eddie Calvo would be if given a chance to meet him. Governor Calvo has told PNC that he believes marriage should only be between a man and a woman and that he doesn’t believe marriage is a constitutional right. Calvo is defending a lawsuit filed in District Court by same-sex couple Kathleen Aguero and Loretta Pangelinan challenging Guam’s marriage laws.

“I would say that marriage licenses are issued by the government, by the state and that represents a civil right. All we’re asking for is the same civil rights as any other couple. So while I can understand and appreciate that some people believe marriage is between a man and a woman, that is coming from a religious point of view. Marriage is not a religious institution. Marriage does not require a religious ceremony,” Obergefell says.

Dr. Robert Underwood explains why he invited three marriage equality activists to Guam, one of whom is the face of a groundbreaking and historic case for the nation.

“As far as the university being on the forefront of the this, absolutely! And it should be and we’re proud to be. I can’t say how strongly we feel or I feel about it in terms of being able to present this issue. It’s gonna be very rare that we have the opportunity to be able to be able to have commencement speakers who are at the forefront of an issue,” says Underwood.

Obergefell also has an interesting connection to Guam. His father was stationed on Guam during and after World War II. Obergefell says he proud to honor his father by visiting an island in which his father once lived.

This Sunday will be the first time that Obergefell gives a speech as the keynote speaker of a college graduation ceremony.