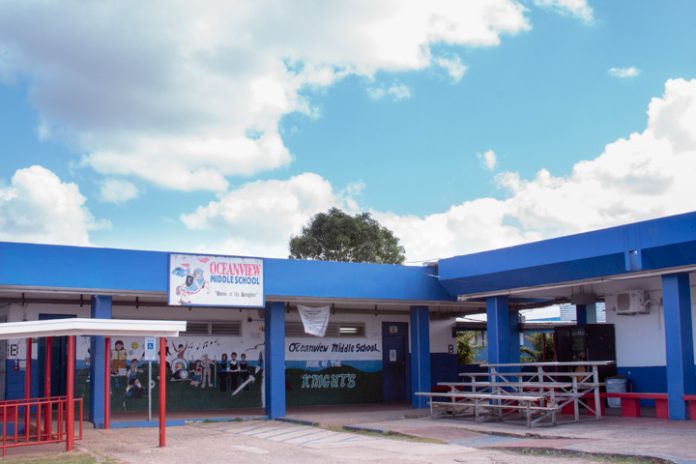 The Guam Department of Education will begin renovating their schools — starting with Oceanview Middle. Which will shut down later this year.

Following a recent inspection of Oceanview Middle School, which was conducted by both GDOE and Guam Public Health, it was decided to shut down the school in order to conduct a much-needed renovation.

Acting Superintendent Francis Santos made the statement during a recent Guam Education Board meeting.

In an interview with Patti Arroyo on Newstalk K57, Santos shared to the public the plans for Oceanview’s relocation.

Santos said, ” the plans that are now under discussion between the leadership of Oceanview middle school and Southern high school principals together with Erika Cruz is to move the school, the entire school over to the southern high school.”

Oceanview has approximately close to 400 students that will be transferred to the Southern High School Wing.

In an interview with PNC, Mark Mendiola, Guam Education Board Chairman, said that the reason for the move to Southern is because their facility is not being used to its maximum capacity.

Making it an ideal location for the temporary housing of Oceanview faculty and students.

Santos also agreed with this ideal move, saying this is a long-term solution outlook and is one of the better structures for this.

The transition looks to transpire later this year during the holidays to prevent any instructional or operational disruption to the school.

Chairman Mendiola clarifies that Oceanview Middle School is not permanently shutting down, saying that it’s just temporary so that they can begin to plan the next step for its situation.