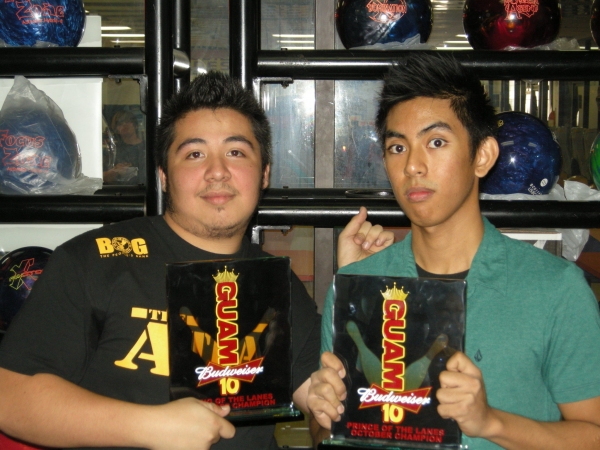 Guam- Keith Guerrero sustained an early lead to edge top qualifier Jay Leon Guerrero 197-195 and claim the October title of the King of the Lanes.  Guerrero and Leon Guerrero extended similar shots throughout the game, however, Guerrero was able to pull off the victory and claim the top prize.

Guerrero beat out Michael Joya in the semi-final match 229 to 194 while Leon Guerrero pummeled Rick Ada 269-193 to set the monthly finale.

Michael Gadia repeated as the Prince of the Lanes nullifying a seven pin advantage by 2nd seed Jesse Ada as he pressed on with a 192+19 to 158+26 victory.  Gadia took the early advantage but a missed ten pin spare on the third frame allowed Ada an opportunity to take the lead.  The lead went back and forth until Gadia doubled on the eighth and ninth frame while Ada opened on the two occasions which helped seal the October title.

In the semi-final round top seed Michael Gadia earned a hard fought victory over two time monthly champion Teliann San Nicolas with a 238+19 to 213+17 tally while 2nd Jesse Ada ousted Shannon Bukikosa 204+26 to 159+21.

The final monthly qualifying round of the year will be held on Sunday, November 21, 2010 at 11:00 a.m. at the Central Lanes Bowling Center.