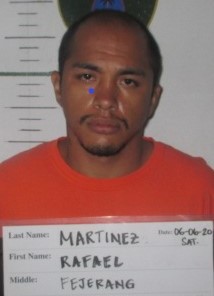 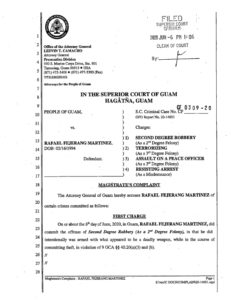 A 26-year-old man has been arrested on allegations of terrorizing and assaulting a police officer, among other charges.

During the course of the arrest, an officer applied an open-palm strike and the suspect said he could not breathe.

At 4:47 a.m. Saturday morning, police responded to a disturbance call, possibly involving a firearm, in the parking lot of the New Home Plus Mart in Tamuning.

There they encountered Rafael Fejerang Martinez “struggling with a security guard,” according to the magistrate complaint.

The security guard reported that he was inside the building when he heard a “clicking” sound coming from the outside. He went to investigate and encountered a shirtless man later identified as Martinez.

The guard said Martinez approached him and pointed “what appeared to be a black and silver pistol at him.”

The guard attempted to calm Martinez by giving him his cell phone, his backpack, and a vape pod because he was “scared for his life.”

Eventually, the guard’s supervisor appeared. The guard told his supervisor to call police and he then grabbed Martinez and managed to kick the pistol away from him.

When police arrived they told Martinez to get down on the ground, but he refused. He was told “multiple times” to place his hands behind his back but he refused to do that as well, states the complaint.

However, as the arresting officer was conducting a pat-down in search of a weapon, Martinez kicked him in the “groin with his left leg,” states the report.

The officer then “responded with an open palm to the abdomen” and Martinez “then apologized.”

Soon after, while in custody, Martinez began to complain that “he could not breathe.”

He was taken to Guam Memorial Hospital and examined after which he was brought back to the Tamuning Precinct.

The pistol was recovered and it turned out to be a plastic imitation pistol black and silver in color.

Martinez was booked and confined charges of second-degree robbery; terrorizing; assault on a peace officer; and resisting arrest.