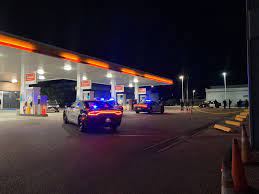 An officer has been indicted on manslaughter and negligent homicide charges.

“Not Clearly Justified” was what Attorney General – Leevin Camacho – described Officer Justin Quenga’s actions on the night of March 9th.

PNC Previously reported that an Independent Investigative Team conducted an investigation into the fatal Shell gas station shooting that occurred on March 9th.

The shooting lead to the death of Jopy Rudolph, Rudolph – on the night of – reportedly was using a slingshot to shoot those around him.

A medical examiner determined that the cause of death was a result of multiple gunshot wounds and ruled the manner of death as a homicide.

The Office of the Attorney General told reporters during a recent media conference – that based on interviews, and evidence gathered, the case has been presented to a Grand Jury.

Officer Quenga has not been arrested, rather he has been summoned to court.

Moreover – the Guam Police Department are aware of the situation.

A separate Internal Affairs Investigation has been initiated and Officer Quenga has since been placed on administrative leave according to GPD.