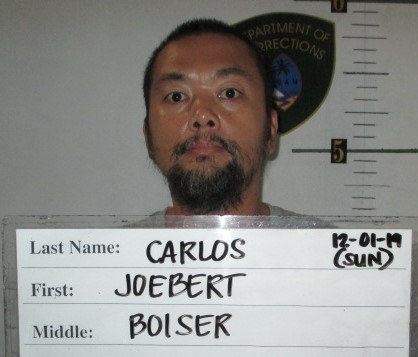 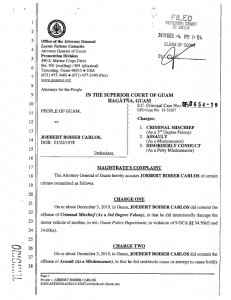 The magistrate complaint about the suspect seen in a viral video being struck by a police officer states that the officer who hit the suspect did so “to gain compliance” by using “an open palm strike,” which is an accepted law enforcement technique.

The suspect, 41-year-old Joebert Boiser Carlos, has been charged with criminal mischief, assault, and disorderly conduct. He made his first appearance in Superior Court Wednesday.

According to the magistrate complaint, Guam police were called to Ypao Park about noon on Tuesday after getting a report about a combative man who was challenging park visitors to fight him and swinging his fists randomly at other people.

A Parks and Recreation lifeguard was holding onto Carlos’ arm when police arrived. Carlos’ hands were restrained behind his back with plastic zip ties. His clothes were soiled and he had sand on his head and face.

The lifeguard told police that when he confronted Carlos about his belligerent behavior, Carlos ripped his sunglasses off his face and tried to punch him.

The lifeguard ran back to the lifeguard tower where he grabbed his radio and the zip ties. When he returned, Carlos again threw a punch at him but missed. The lifeguard said he then executed a take-down on Carlos, turned him on his stomach and zip-tied his hands.

When police arrived Carlos continued to be combative and a police officer “executed a leg sweep” on him and “knocked him to the ground” then directed him to a patrol car. But, according to the complaint,  Carlos “thrust himself backward towards the officer and kicked the rear bumper of the patrol car.”

The complaint states that the officer then conducted “an open palm strike to the abdomen” of Carlos to gain compliance.

It involves using the butt of the palm which is considered safer than using a closed fist when striking a person. It is less harmful to both the officer and the suspect.

The door of the patrol car blocks a view of the officer’s hand and Carlos’ stomach so it’s not clear whether the officer did, in fact, strike Carlos with an open palm or a closed fist. Nor is it clear whether a blow to Carlos was necessary at that point.

Once inside the vehicle, the complaint states that Carlos continued to be belligerent, kicking and attempting to damage the interior of the vehicle.

Carlos told the arresting officer that his last name was “Immaculate Concepcion” and that his address was earth. On occasion, he spoke in Tagalog, states the complaint and he also claimed to be the Pope’s bodyguard who defended the church from evil spirits.