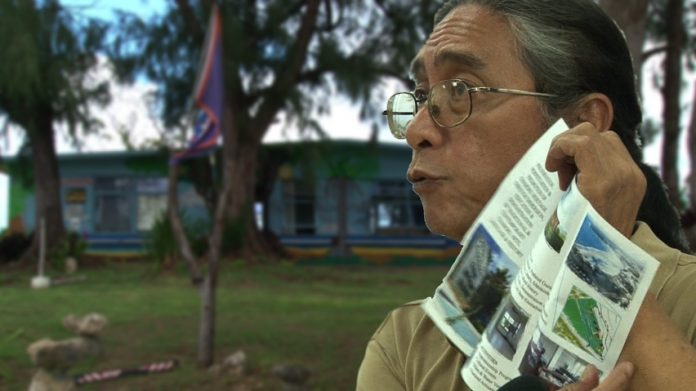 The non-profit organization “Inadahen i Lina’la’ Kotturan Chamoru” is worried that a plan to lease the Oka point Chamorro Land Trust property could ruin their efforts to perpetuate the Chamoru culture and language.

Guam – The non-profit organization that runs the Chamoru cultural center at Oka Point is concerned that their cultural center may be taken away from them and given to a private developer. The property is currently within the Chamorro Land Trust inventory.

“There’s only two places that perpetuates our language and our culture. What are we doing? Chamorro Land Trust is supposed to be a place where Chamorro is perpetuated not just our land but our culture as well and we are apropros to this program and now a developer a potential developer is about to come in and engulf us by removing us from a program that was meant for us. Does that make any sense to you?” said Inadahen I Lina’la’ Kotturan Chamoru member.

During a legislative oversight hearing Ed Benevente of the non-profit organization “Inadahen I Linala Kotturan Chamoru” told lawmakers that his group fears a land grab of the Sagan Kotturan Chamoru cultural center they created on Chamoru land trust property on Oka point.

This is property that the CLTC and GEDA is now eying for a potential private development. “We’ll kick out the Chamoru that was supposed to be who is germaine to that program out because he only has a license. So we’ll wait for one violation,” said Benevente.

According to Senator Tom Ada a determination of need document was drafted up that spoke about consolidating or incorporating the cultural center into a private lease for the entire Oka point area. However, CLTC Administrator Mike Borja says there have been no solicitations or formal plans to develop the area. “You know there was a lot of brainstorming going on but nothing that was really, that was the final thing that was put down for that one specific area. Just brainstorming to try and figure out ways to assist really them to provide the facilities for them so they can have something to get whoever the lessee is gonna be for that property to build something that they could use and need so that they could take advantage of the infrastructure development that would go inside there anything, but it’s been all brainstorming there’s been nothing put down in plans or approved by the commissioners it was just brainstorming,” said Borja.

However Benevente and the operators of the Chamoru Cultural Center are still concerned especially because they cleared the jungle and cleaned out the old abandoned buildings with nothing but volunteers. They created a Chamoru cultural center that is open to the public, open to school field trips and open to the island’s tourists operating on nothing more than volunteer work and meager donations.

“So I leave it to you guys man protehi fan ayuda ham yan difende ham hasso eyi iyota oath ni para ta protehi yan difende I lenguahi-ta I kottura-ta I tano-ta I ante-ta I aire-ta I hanom-ta yan todu,” said Benevente. Essentially Benevente was asking lawmakers to protect help and defend the cultural center. He also asked them to remember the oath known as the Inifresi which states in part to protect and defend the language, culture, land air and waters of Guam.