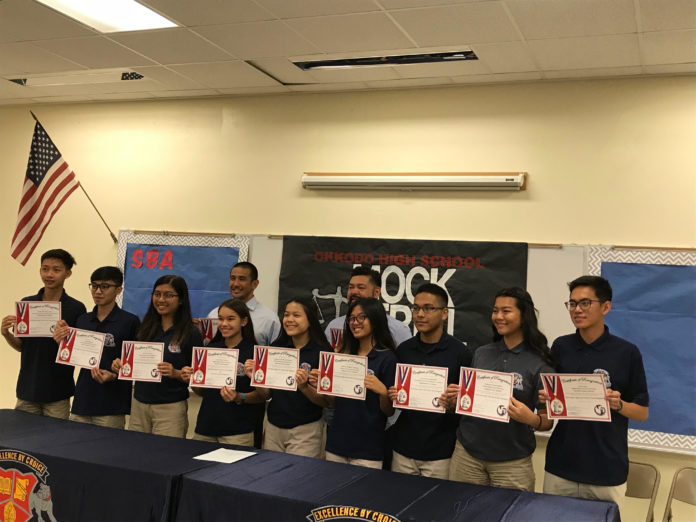 Guam – Okkodo High School’s Mock Trial team is that much closer to flying out to Reno, Nevada to represent the island in the National competition in May.

A surprise announcement left not a single dry eye in the room.

The Department of Administration Director, Edward Birn surprised the team with an announcement that the airfare of eight students would be covered through a government mileage program.

The program authorizes the use of frequent flyer miles accumulated from GovGuam credit card purchases for airline tickets, to be used for off-island medical referrals and off-island student travel. Enacted in 2013, this is the first time that a student group will receive the benefits of the program.

“And, I’m very proud, as is everybody here, to announce that Okkodo’s Mock Trial team will be the first recipients…we’ve accumulated enough mileage for eight students, and the remainder will come from the funds that the mayor has more than kindly talked about this morning. So, congratulations from me to you,” said Birn.

The team had gathered in a recognition ceremony to celebrate their schools victory in the 2018 Island wide competition.

GDOE Superintendent Jon Fernandez expressed his excitement in this victory as private schools have raised trophies for many years, and this time, a public high school would have that honor.

“In our brief conversation earlier I learned a couple things that I thought were remarkable. First of all, this is the first time you’ve had a Mock Trial team? You’re a first year team, congratulations, that’s amazing to me, to do that in one year. Number two, you have a first year coach, I heard that right, Attorney Camacho, this is your first time coaching a team…that’s amazing. Number three, I heard all of you are juniors, so wow, I don’t know, we’re talking about graduating next year. You have an opportunity to return and do an even better job or support your next team, participate, however you choose,” said Fernandez.

At the ceremony, the team was present to receive a check from Dededo Mayor Melissa Savares. At Tuesdays Municipal Planning Council meeting, members had voted on a motion to award $5,000 dollars to the team, as they seek to raise funds to travel to Reno, Nevada for the National Mock Trial competition.

In addition to the support from DOA and the Dededo mayor’s office, contributions from two generous guest speakers brought a joyful end to the celebrations.