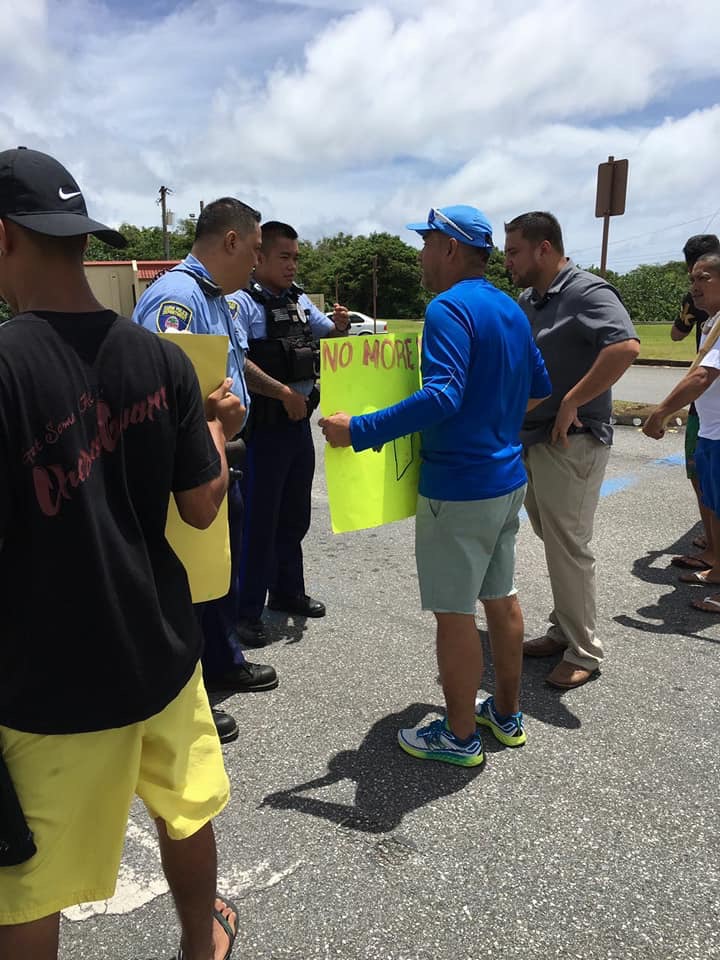 A protest against the military firing range at the Northwest Field overlooking the Ritidian Wildlife Refuge resulted in the arrest of 54 year old Harold Cruz.

Guam – A group of protestors blocked the entrance to the front gate of the Andersen Air Force base on Saturday.

The group which consisted of a lot of highschoolers and young adults began the protest at around 11am before disbanding at around 2pm according to Prutehi Litekyan member Kelly Taitano. Taitano said students from Southern High, Simon Sanchez High, GCC and UOG all participated.

At one point in the protest several demonstrators decided to block the entrance to the front gate of the air force base with a human chain. Senator Fernando Estevez was among the protestors. He could be heard on a video yelling for base security to bring out the base commander.

Senator Estevez told PNC, “These people have gone through all the proper channels and have been getting the run around by federal and military officials. The people out here are not anti-military, they just want their concerns addressed. I understand people are angry because of the inconvenience this caused, but my, how far we’ve fallen that convenience is more important than a culture and ecology thousands of years old. It’s better that people judge our actions, than to look back at our history judging our inaction.”

The Guam Police Department was eventually called to the scene. According to a release from GPD PIO A.J. Balajadia roughly 30 people were blocking access through the front gate. Officers asked them to leave but they refused to disperse until the main agitator was arrested.

Taitano told PNC, “If the military had listened to the data in their own studies that showed Tailålo (Northwest Field) and Litekyan (Ritidian) was the worst  choice, all of this could have been avoided.”