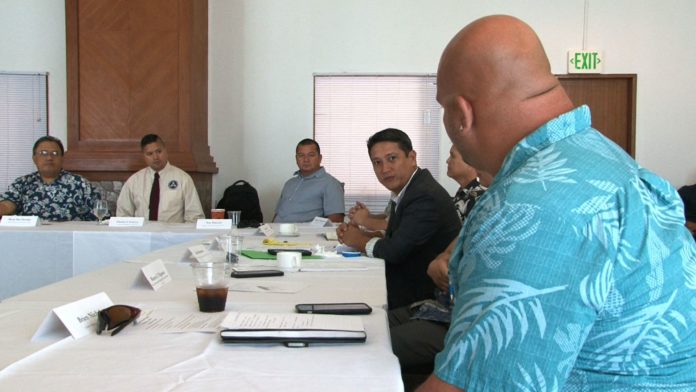 Guam – The Office of the Governor of Guam and the Offices of Homeland Security and Civil Defense are hosting a joint Guam and CNMI “One Marianas Summit.”  The aim of this event, part of a recent bi-lateral agreement between the territorial governors, is to initiate discussions on how Guam and the CNMI can better cooperate.

Senator Wil Castro was instrumental in coordinating both the summit and the signing of the MOU between the two governments.

“Ultimately the Memorandum of Understanding between Guam and the CNMI is a policy framework from which we are able to have discussions between both jurisdictions about issues of mutual concern and benefit. So, the Calvo administration is hosting today’s ‘One Marianas Summit’ and the idea behind this summit is to have the administration determine and establish a working agenda of what it believes to be the top priorities within six major topic areas,” said Sen. Castro.

During this summit they hope to come up with the top three priorities of the six major topic areas. They will then bring these priorities to another meeting to be held in the CNMI from January 31st to February 2nd. Castro believes Guam and the CNMI can improve food security by increasing the sale and trade of produce between the islands. If a disaster or war for example were to cut off the shipping lanes Guam and the CNMI could face a food shortage.

“Could we rely on our Pacific Island neighbors, our brethren to the north, and vice-versa them to look to us to provide certain types of products for example? The sweet potato: the kamute, or the corn that we always see on the side of the road. Could we in fact embrace and ramp up scale up the production of those two items from each jurisdiction and provide the right economic incentive and policy framework so that both industries could thrive,” asked Senator Castro.

CNMI Office of the Governor Press Secretary Kevin Bautista says that Guam and the CNMI could potentially work together on tourism.

“So, we have similar market shares right now between Guam and the CNMI. Right now, we were just talking about the possibility of some joint packaging which has been done in the past and through the close collaboration between our Marianas Visitor’s Authority and the Guam Visitors Bureau there have been some positive strives made on that end,” said Bautista.  He added they want to formalize things like this process of joint tourism packages.

Ultimately the idea behind both the MOU and the summit is to allow the two island governments to speak with a collective voice on local, regional, and national issues and develop policy solutions that will benefit both jurisdictions.