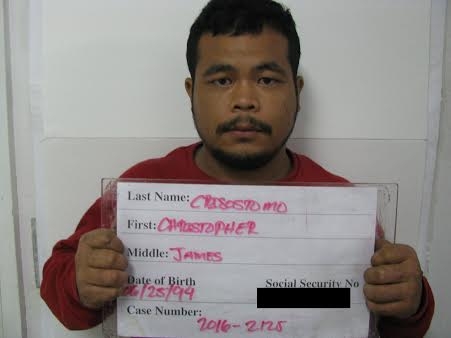 This arrest was unrelated to the shooting incident at the Ipan Public Beach on Jan. 22nd.

Balajadia says that at 12:57pm on Tuesday “Officers from the Agat precinct responded to the Talofofo village for a reported shootting. Upon arrival the victim reported that a male individual known to him, had pointed a rifle at him while he drove passed the individuals residence. The suspect ran towards the direction of the victims passenger side and shot at him. The passenger window area was shattered as a result. No injuries reported. Tuesday, February 10, 2016, 12:38am, Christopher James Crisostomo, m/gua/21/talofofo, was arrested for, Attempted Murder, Assault with a Deadly Weapon, Reckless Conduct, Criminal Mischief and Use of Deadly Weapon in the Commision of a Felony. He was Booked and Confined”

Meanwhile although four men were arrested in connection with the Ipan beach shooting incident none have been charged with any crime.