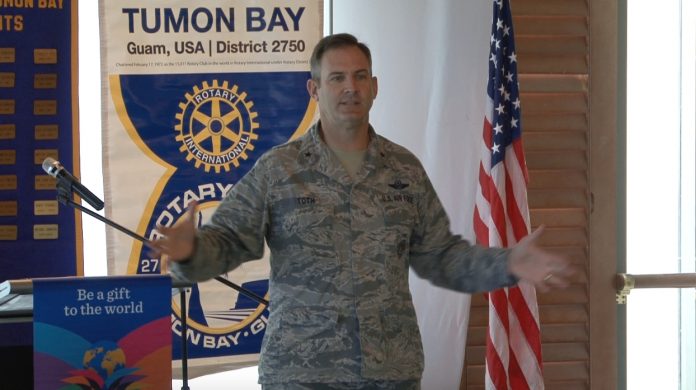 Guam – One of the U.S. military’s top leaders on Guam spoke at the rotary club today where he touched on everything from the military buildup to the threat of North Korea to Guam.

Brigadier General Andrew J. Toth touched on a variety of topics related to Guam and the U.S. Military, specifically Andersen air force base. Toth starts off by explaining the importance of the military buildup. Guam is in the middle of what Toth calls the strategic triangle.

“Everything that’s going on with ISIS is causing some issues. A resurgent Russia [and] things that are going on with China; all of these factors come into play but Guam is strategically important,” said Toth. “Here, we’re not so much so we have an ability from us territories air and water and land here to be able to project power form this location and get to places where we need to get rather quickly.”

Toth says Andersen at any one time has B52 bombers, F22 fighters as well as stealth fighters. He also said that Andersen houses remotely piloted vehicles, or automated aircraft, which are used for intelligence reconnaissance.

Toth also talked about events coming up for the Andersen Air Force including the Christmas drop where the U.S. Military on Guam, and this year with Australia and Japan, accept donations and gifts to deliver to children and families in need in the Pacific region. The drop has been going for 54 years according to Toth.

Then came the question and answer where one rotary member asked Toth if Guam was ready for a possible attack by North Korea. He said he would not get into specifics but THAAD, a missile defense system on Guam, would help to cancel out the threat of a ballistic missile attack.