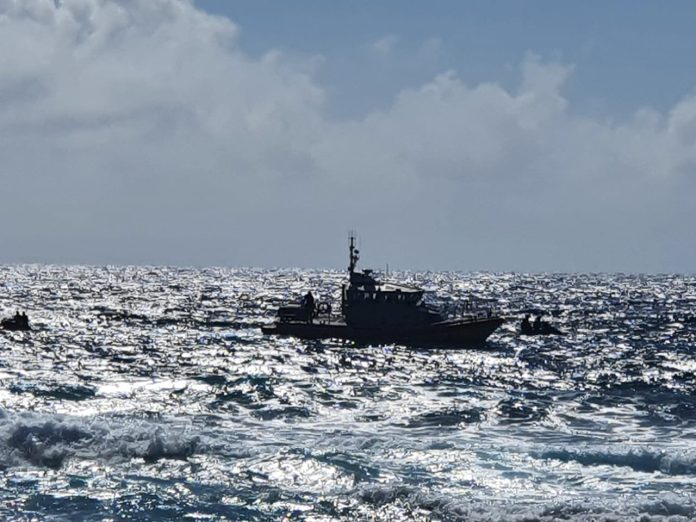 According to Guam Fire Department PIO – Kevin Reilly- earlier today, just before 9 am – Guam Fire rescue units recovered the body of a fisherman who was reported missing over the weekend.

Units from the Guam Fire Department, USCG Station Apra Harbor, and HSC-25 continue to search for two male fishermen, ages 24 & 28, that were swept off the reef at Ulomnia Beach in the village of Inarajan at around 6:33pm Saturday evening, according to GFD.

Rescue Boats from GFD and the USCG as well as a Navy HSC-25 helo are conducting searches outside the reefline and will continue as conditions permit.

According to Reilly – Personnel from both the Talofofo and Inarajan fire stations also performed shoreline searches at night.

The search continued into the early morning hours of Sunday morning. The search team further consisted of units from GFD – USCG Station Apra Harbor, and the National Guard. According to GFD – the aforementioned units did multiple searches of the area ranging from Bear Rock to Talofofo Bay.

According to Reilly, yesterday’s search had to stop due to hazardous sea and surf – to this morning. Moreover, Reilly reports that before 9 am this morning – Guam Fire Rescue units were able to recover the body of 1 of the 2 missing fishermen. The male individual was reported to have been transported to the morgue for identification.

According to Reilly, both GFD together with the Guam Police Department and a drone from the Aviation Concepts will continue to search for the missing man.

PNC will continue to update as more information becomes available.