Overtime for Guam fire and corrections officers has increased dramatically over the past 5 years, according to an analysis released Sunday by the Office of Public Accountability.

The amount of overtime paid to Guam police officers has fallen, states the report.

““We conducted a thorough review of GFD, DOC, and GPD’s overtime expenditures and the numbers speak for themselves,” said Public Auditor Benjamin Cruz in a release accompanying the analysis. “Over the past five years alone, GFD and DOC overtime increased 44% and 65%, respectively. On the other hand, GPD’s overtime decreased by 33%,” he said.

Fifty-percent of all the overtime paid out during that 5 year period went to Guam firefighters, a total of $24.3 million.  GFD firefighters operate on a 24-hour shift schedule for five days per pay period, they regularly receive 14 hours of overtime.

However the highest percentage increase in overtime occurred at the Department of Corrections. Overtime there rose as the number of corrections officers fell hitting a low of about 160 officers in 2019, compared to more than 300 in years past.

Overtime at the Guam Police Department did not increase, it was down by 33%, despite a declining number of police officers during that same period.

In all, from October 1, 2014, through September 30, 2019 $40.8 million dollars in overtime was paid to Guam police, fire and corrections officers. That was 84% of all the overtime paid to GovGuam employees during that period. 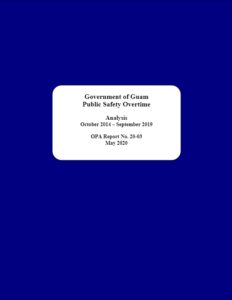 *Guam Fire Department: Over five years, GFD overtime expenditures increased by 44%, or by $1.5M. Fire Captains, Fire Service Specialists, and Firefighter IIs were the top earners of overtime pay at GFD, averaging between $34 thousand (K) and $43K a year in overtime. GFD accounted for 50%, or $24.3M, of all GF overtime expenditures.

The OPA’s analysis also identified the “inequitable treatment of reporting requirements and payment of overtime expenditures” amongst GFD, DOC, and GPD.

In addition the report found that DOC and GPD were non-compliant with overtime reporting requirements, which imposed a $250 fine for each missed or untimely report.

To address these findings, the OPA has recommended: