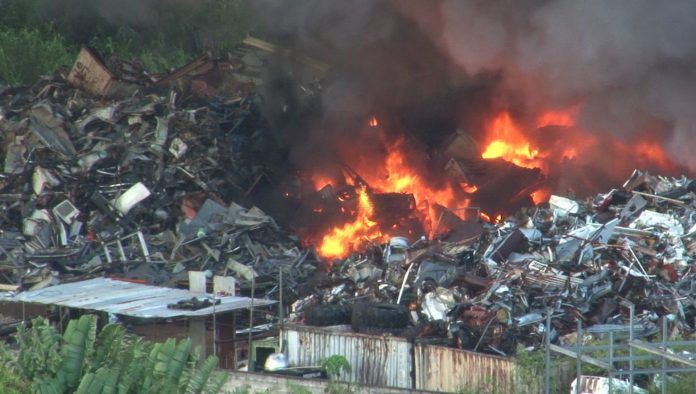 GFD is now looking into the way the recycling center stacked their debris and whether it contributed to the spread of the fire.

Guam – The massive fire that was seen from most of central Guam started out as an open fire that was left unattended, according to Guam Fire Department Chief Joey San Nicolas.

From there it spread to nearby grass and then onto a scrap yard that sparked the multiple explosions.

GFD Spokesperson Cherika Chargualaf says the fire was reported at 4:25 pm Saturday and within a few minutes, firefighters were on scene. Social media was quick to post up pictures and videos of thick black smoke billowing from the Harmon Industrial area.

By nightfall, GFD advised that it would take longer to put out the blaze than they had anticipated with an initial smoke advisory in effect until midnight. GFD Chief Joey San Nicolas was on Mornings with Patti on Newstalk K57 today.

“n particular this fire was complicated due to the amount of debris. This was a scrap yard. The fire basically jumped up through a grass fire and went into this pile of rubble, metals, debris, rubber, everything that you would–rubber tires, all kinds of things that you would find at any scrap yard. It went right into the middle of the pile,” explained San Nicolas.

Because the source was difficult to get to, San Nicolas says they made an emergency declaration to be able to get heavy equipment to get closer to the source. Several agencies, local, federal and non-profit stepped in to help, such as Guam Airport Fire, Navy Fire, Andersen Fire, the Department of Public Works and Salvation Army.

“We were able to get into the fire, knock it out and pretty much half the day. I’d say about six hours, actually, we got to the feet of the fire and then it was just a matter of knocking out all the hot spots,” noted San Nicolas.

Now it’s a matter of investigating the exact cause. But San Nicolas says preliminary reports indicate that the fire actually started in an adjacent lot inside the Harmon Industrial park and not at FSM Recycling where firefighters spent most of their time trying to put out the massive fire. In fact, it started out as open burning.

“FSM Recycling is permitted to operate a recycling center on Guam and that permit comes from us,” Rupley said.

But Chief San Nicolas says the rapid and uncontrollable spread of the fire could have been prevented.

“The fire did not start inside that scrap yard. So now no fault as far as the fire starting but could it have been prevented or minimized by the way they stacked their materials? That’s something we’re gonna look into,” remarked San Nicolas.

“We regulate their activity. Now, depending on what comes about from the final fire investigation, we’ll determine what type of measurements we’re gonna take in our investigation. So if there were any violations that occurred or if there are any environmental regulations or statutes that were broken then we will issue a notice of violation,” Rupley added.

It took GFD and other federal and local agencies about 30 hours to extinguish the fire while a smoke advisory remained in effect 24 hours after the fire first broke out.