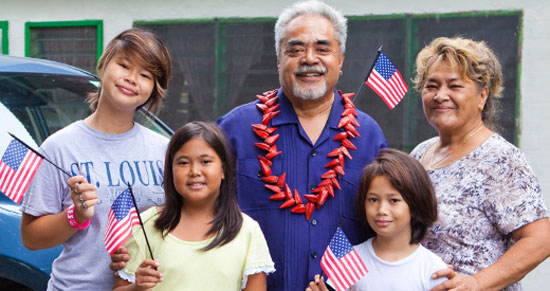 Washington, D.C. –  Does the Constitution permit the federal government to recognize people born on U.S. soil as Americans, but not as citizens?

That’s the question before the D.C. Court in the landmark case Tuaua v. United States.  In their opening brief filed on Friday, the Tuaua Plaintiffs argued that Congress has no power to redefine the Citizenship Clause of the Fourteenth Amendment to exclude people born in the U.S. territory of American Samoa from its guarantee of birthright citizenship.

Lead Plaintiff Lene Tuaua is a proud, passport-carrying American, born in American Samoa, a U.S. territory since 1900.  While attending college in California during the 1960s, he registered for the military draft.  He has both a child and grandchild born in American Samoa who currently serve in the U.S. Armed Forces.

But the federal government refuses to recognize any of them as U.S. citizens.  Instead, discriminatory federal laws and agency policies label them and others born in American Samoa as “nationals, but not citizens, of the United States.”

Mr. Tuaua wants to change that.  He, the Los Angeles-based Samoan Federation of America, and other individuals born in American Samoa are challenging this second-class status in their appeal to the D.C. Circuit.  Their argument is simple: the Fourteenth Amendment guarantees them citizenship by birth on U.S. soil.

“Because we are born on U.S. soil, my family should have the same rights as other Americans and be recognized as citizens,” said Tuaua, a retired Marshal of the High Court of American Samoa.  “How can we be Americans, but not citizens?  That simply doesn’t make any sense.”

The federal government argues that the Constitution’s guarantee of birthright citizenship does not apply to people born in American Samoa.  If they want to be citizens, the government argues, these Americans must undergo the same process of naturalization as foreign nationals.

Loa Pele Faletogo is President of the Samoan Federation of America.  He was born in American Samoa, where he enlisted in the U.S. Army in 1975.  After retiring, Mr. Faletogo and his family settled in Los Angeles, California, where they have lived for more than 20 years.  Frustrated that he could not vote as a “non-citizen national,” he went through the costly and burdensome naturalization process.  Over the years the Samoan Federation has helped many American Samoans naturalize, but thousands of others living throughout the 50 states remain disenfranchised because of their non-citizen status.

“I’m an American and a veteran who was born on U.S. soil.  I shouldn’t have had to naturalize in order to enjoy the right to vote in California.  For too many American Samoans living in the states, the naturalization process has become a poll tax and literacy test all rolled into one.  Our community deserves better, and the Constitution demands it,” said Mr. Faletogo.

In defending the laws that impose a second-class legal status on American Samoans, the federal government has relied on a series of controversial decisions known as the Insular Cases, which First Circuit Judge Juan Torruella has criticized as establishing a “doctrine of separate and unequal” status in U.S. territories.  Speaking at Harvard Law School’s “Revisiting the Insular Cases” conference in February, Judge Torruella argued that “[t]he Insular Cases represent classic Plessy v. Ferguson legal doctrine . . . that should be totally eradicated from present day constitutional reasoning.”

Last June, the D.C. District court dismissed the Tuaua lawsuit, and the plaintiffs appealed to the D.C. Circuit.  This past February, the D.C. Circuit denied the federal government’s motion to dispose of the appeal before full briefing, paving the way for today’s filing.

“The Constitution’s command is clear.  Citizenship is a right, not a privilege, for everyone born on U.S. soil, including those born in U.S. territories,” said Neil Weare, President of We the People Project, a non-profit that works to achieve equal rights for residents of U.S. territories, who represents the Tuaua plaintiffs.

“The Citizenship Clause was written to strip the government of the power to say that people born on American soil aren’t citizens.  It defies the Framers’ intent for politicians to try restricting where the Citizenship Clause applies and who it applies to,” said Murad Hussain, part of a team of attorneys at Arnold & Porter, LLP, who are providing pro bono representation.

“So long as American Samoa is under the U.S. flag, this second-class status is not just a legal wrong under the United States Constitution, it is moral wrong,” said Charles V. Ala’ilima, a prominent American Samoan attorney who is also providing pro bono representation.

The next deadline in the case is May 12, when amicus curiae supporting the plaintiffs will file their own briefs.  Several groups have already asked the D.C. Circuit’s permission to do so, including “current and former government officials” represented by Covington & Burling LLP, “citizenship scholars” represented by Gibson, Dunn & Crutcher LLP, and “constitutional law and legal history scholars” represented by Wilmer Cutler Pickering Hale and Dorr LLP.

The federal government will file its brief later this summer, as will the American Samoa Government and the Territory’s congressman, who have moved to intervene in the appeal.  If the D.C. Circuit holds oral argument, they are expected to take place later this year.

For an overview of the constitutional arguments in Tuaua v. United States, please see Neil Weare’s February Op-Ed on CNN.com, “Citizenship is a Birthright in U.S. Territories.”

Interviews with plaintiffs and counsel are available upon request. Please contact, Neil Weare, President, We the People Project, 202-304-1202, nweare@equalrightsnow.org