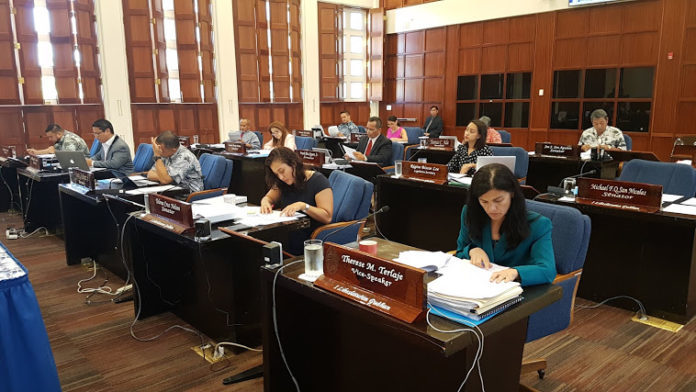 Guam – The Guam Supreme Court’s dismissal of Gov. Calvo’s Tax Revenue Anticipation Note TRAN legislation has empowered the legislature to limit executive impingements on its lawmaking authority. But it seems local senators themselves overwhelmingly prefer the governor’s authority over U.S. Congressional authority when it comes to the power of the purse.

Resolution No. 310-34 (COR) seeking to federally require the governor to deposit a percentage of tax collections into the Guam Income Tax Refund Efficient Payment Trust Fund for the payment of income tax refunds via Congressional amendment to the Organic Act of Guam—FAILS.

Resolution No. 311-34 (COR) seeking to federally require any provision establishing a locally enacted tax or tax increase be ratified by a majority of votes cast in a general election via Congressional amendment to the Organic Act of Guam—FAILS.

Resolution No. 312-34 (COR) seeking to federally require any locally enacted provision increasing public debt by $25 million or more be approved by a majority of votes cast in an election, via Congressional amendment to the Organic Act of Guam—FAILS.

Sen. Mike San Nicolas is the author of those three failed Organic Act amendment resolutions. Following a heated exchange with Vice Speaker Therese Terlaje over the naming of a proposed federal amendment after the late Speaker Ben Pangelinan, San Nicolas broke quorum at a sparsely attended convening of this week’s session by walking out of legislative chambers, dramatically underscoring a consistent point San Nicolas has been making about what he sees as a need for overriding controls on administrative spending at the governor’s office. San Nicolas contends that only amendments to Guam’s Organic Act can constrain a governor’s authority to tax and spend. Nevertheless, few of his colleagues see deficit spending in quite the same light, shooting his Organic Act amendment plans down in flames, at two margins of 10 to 4 and one margin of 11 to 3.

Winding down their third day of session, lawmakers approved the following legislation for the governor’s signature.

Bill No. 215-34 (LS) seeking to create a Guam Ancestral Lands Commission Survey, Infrastructure, and Development Fund from the lease proceeds of Apra Harbor and Polaris Point—PASSES.