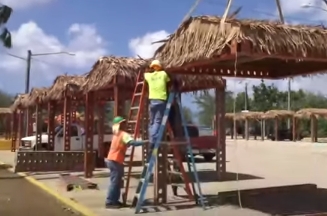 We’re just a little over a week away from the Festival of the Pacific Arts and despite issues and concerns raised, the FESTPAC organizing committee says they’re ready for the big event.
Guam – Guam will be hosting the largest cultural event in the region – FESTPAC, but with all the excitement comes all the planning that still needs to be ironed out.
FestPac Organizing Committee Chairperson Nate Denight says, “Really, it’s a community event but obviously, a lot of work to be done. A lot of details that we make sure to cover but so far, so good.”
One of the main concerns for FestPac was the housing situation. The Guam Department of Education will be preparing about 300 classrooms to house about 3000 incoming delegates. According to Housing Subcommittee Chair Mark Mendiola, they recently took a tour of the eight schools that will be used to house the delegates.
Mendiola explains, “Right now we prepared basically for 295 classrooms. For public health regulations, because we’re using it as a housing venue and not an emergency shelter, it’s one person per 50 sq ft. Each of the classrooms we identified we actually measured the classrooms to ensure we meet that standard so each room would hold about 10 delegates.”
Mendiola says they only have two days to transition the schools, but he is confident that everything will run smoothly. GDOE will be supporting the festival by providing the housing managers, shift supervisors and close to 80% of the housing staff needed to operate the housing facilities.
Meanwhile, another concern for FestPac was the lack of parking, but Denight says they addressed that issue as well. “There will be parking throughout Hagatna. I want to mention some of the primary parking venues: Hagatna swimming pool, Department of Land Management lot, Government House, Adelup and Tiyan Parkway. There will be shuttles running every 20 to 30 minutes to the main site at Paseo,” he says.
Leading up to the festivities, Denight tells PNC that there will be a handful of ribbon cutting ceremonies for various facilities in and around Hagatna. Denight says, “Everything from Paseo Stadium being revitalized, the Rec Center, the crosswalk from Hagatna to the Chamorro Village. We’ll be having ribbon cuttings.”
Last but not least, to help residents and visitors get the most out of FestPac, there is a FestPac Guam 2016  mobile app that can be downloaded on your devices. “You could search it by discipline, so if you’re interested in seafaring, carving, tattoo. You can also search by the venue or schedule. We just want to get all the information out to the public in the next 10 days so they know we’re ready for FestPac, they’re ready to attend this historic event,” says Denight.