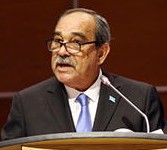 Outgoing Federated States of Micronesia President Peter Christian, whose administration was rocked by a bribery scandal involving his family, will remain president until Congress officials select the president and vice president in May.

Christian lost his seat to David W. Panuelo, chairman of the FSM Congress standing committee during the March elections.

Christian’s election defeat came on the heels of the FBI’s investigation into the bribery case involving Hawaiian businessman Frank James Lyon, in which the FSM president’s son-in-law Master Halbert was implicated and charged with money-laundering.

The FSM presidential election follows an unconventional process. There are four at large seats, one seat given to each of the four FSM states – Yap, Chuuk, Pohnpei, Kosrae. The presidential seat, a required by law, must be rotated among the states but in practice, this has arrangement is hardly followed.