Guam – For first-time coach Tiffany Tam, the timing of the FIFA Grassroots Course & Festival before the start of the Docomo Pacific Robbie Webber Youth League was perfect.

“After I completed the Guam Football Association “E” Certificate course, I was asked if I would be interested in coaching with the Orange Crushers FC,” Tam said. “I wanted to coach, and when this course came up, I saw it as a great opportunity to enhance the knowledge I gained from the E Course. In the few days of participating in the Grassroots Course, I really feel more prepared for coaching in the upcoming youth league.

“Even as a player, I gained a lot more understanding of the game through the course,” Tam added.

Tam is one of over 50 coaches enrolled in the FIFA Grassroots Course & Festival, which was last held in Guam in 2010. In addition to youth league and interscholastic league coaches, this year’s enrollees include coaches from the Philippines and island neighbors Northern Mariana Islands. FIFA instructor Lim Kim Chon, who has been instructing various FIFA coaching courses since 1999, leads the current course in Guam. Particularly for grassroots development, Lim also has traveled to Japan and Chinese Taipei to facilitate courses. Lim, from Malaysia, also conducts courses regularly in his home country and oversees 14 development centers. 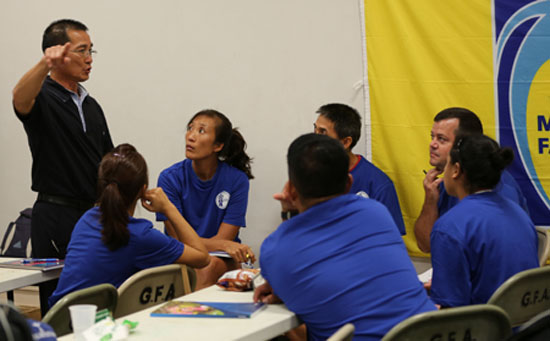 “The coaches in the courses enjoy the camaraderie and exchange of information about the game,” Lim said. “The course provides information to support what they already know about the game and ideas they can incorporate in their coaching.

“The course also is about getting kids to enjoy the game and getting their parents involved by demonstrating how their children can benefit from the sport.

“The youth athletes make up the world’s large majority of players and form the selection base for national youth teams,” Lim added.

The five-day course delved into concepts of coaching youth players aged six to 12 years old in both classroom and practical sessions. Knowledge and ideas gained from the course will be used by course participants to design this year’s festival framework. Classroom sessions were held at the Guam Sports Complex Gym and technical sessions were held on the upper turf pitch at the GFA National Training Center.

“I enjoyed the theoretical sessions of the course,” said Kenneth Domingo, a visiting coach from NMI. “During the sessions, we talked about ideas for practice drills and how to incorporate fun with technical training.

“I want to recommend courses like this to (the NMI Football Association) to help improve the sport in Saipan,” the 16-year-old coach with Tan Holdings FC added.

[FIFA Instructor Lim Kim Chon (in FIFA jacket) explains an activity for coaches during a practical session of the 2013 FIFA Grassroots Course and Festival in Guamat the Guam Football Association National Training Center.]

The course concludes Sunday afternoon with a Grassroots Festival at the Guam Football Association National Training Center from 12:30 p.m. to 2:30 p.m. All youth players are invited to take part in the festival, whether they play with a club, in an interscholastic league, or have never played the sport before. Parents must sign a waiver form provided on site if the youth player is not already registered with GFA. Additionally, the only other requirement for youth players is to wear cleats on the field to participate. 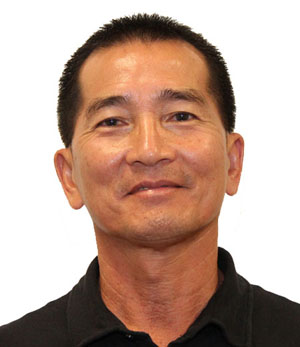 More information about FIFA’s Grassroots Program can be found on the Internet at grassroots.fifa.com.