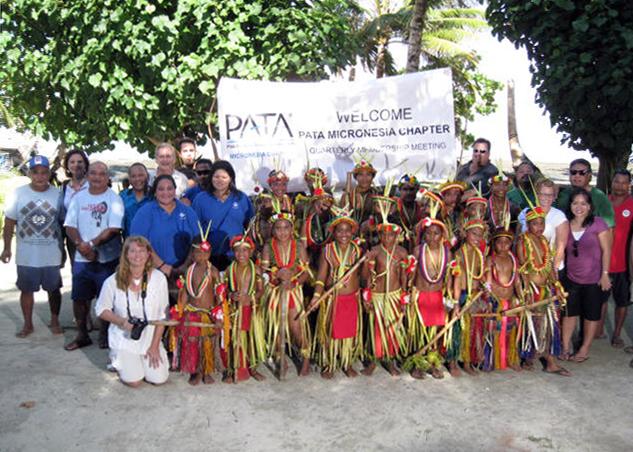 Guam – The island of Yap hosted members of the Pacific Asia Travel Association (PATA) Micronesia Chapter for the organization’s tri-annual meeting from Sept 8-9, 2010, where several measures were discussed to further the region’s exposure on a global scale.

[(Above) Members of PATA Micronesia stand with Yap cultural dancers at the organization’s tri-annual chapter meeting in Yap during their stay from Sept. 8-9]

Regional Tourism Committee members reported work on “Destination eGuides” (electronic brochures) for each island is nearing completion. When all are complete, the collection of Micronesia disks will be marketed together.

The newly formed Micronesia Cruise Association (MCA) was also introduced in an effort to solicit island support. The organization comes in response to a record 13.4 million people who enjoyed cruises in 2009, despite global economic recession and industry forecasting.

“If Micronesia can market itself as a region to become part of this cruise industry, it has the potential to affect everything from profit for our islands to employment for the work force,” said PATA Micronesia Chairman Darin De Leon. “With new cruise ship terminals under construction in Asia and ship redeployments planned for Australia and New Zealand in 2011, our hope is to position Micronesia as a home port for small- to mid-size cruise ships.”

Several cruises have already stopped in Guam, the Commonwealth of the Northern Marianas Islands (CNMI) and Palau including the Queen Mary, Sea Princess and Pacific Princess, Asuka II, C. Columbus, the Nippon Maru and others.

Other business at the tri-annual meeting included potential funding sources and RFP respondents to the Micronesia Branding project, dedicated to unifying the region’s image, and appearances by all of the region’s islands at the upcoming Guam Micronesia Island Fair on Oct. 15-17, 2010.

The annual event showcases the culture of Guam and Micronesia, bringing together entrepreneurs, manufacturers, traditional artists, cultural performers, the national tourism offices of each island nation, and residents. The theme of this year’s event, held at Gov. Joseph Flores Memorial Park (Ypao) in Guam, will be “Celebrating the Tastes of Micronesia.”

The region is also expected to participate in upcoming military trade shows at Naval Base Guam and Andersen Air Force Base on Guam.