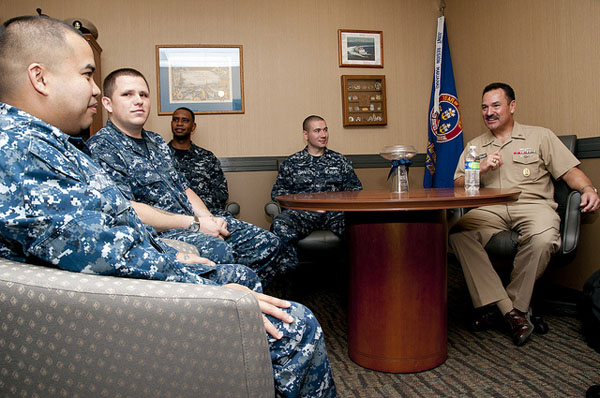 Ramirez, who is U.S. Pacific Fleet’s 16th fleet master chief after taking the position in May, said it was important for him to meet the junior and senior enlisted personnel within the Pacific Area of Responsibility.

“Guam is very special to me,” he said. “I think it’s very strategic and I really want to enhance the recruitment of people coming to Guam because it’s a beautiful place to be and you offer so much here.”

“We want them to know that Sailors, and their families and the civilian personnel that we have are very important to the Pacific Fleet and the mission, that we think about them and that we count on them,” he said. “Part of that is being ready, and readiness means being ready to fight tonight, not tomorrow, but tonight.”

Ramirez explained that not only do Sailors need to understand what they are doing to support the Navy, but their Navy commands must be properly manned, its personnel must be trained and they should have the equipment they need. Eliminating sexual assault was another topic Ramirez addressed, saying that it would not be tolerated.

Joint Region Marianas (JRM) Command Master Chief (SW) Gregory Vidaurri said having Ramirez familiarize himself with Guam is a benefit because Ramirez represents all active-duty Sailors within the Pacific area of responsibility.

“My hope is that he comes away from this knowing that we have a professional, dedicated and highly motivated team of Sailors and Marines on Guam,” he said. “I like being able to showcase what we have to offer here.”

Yeoman 1st Class (EXW/SW/AW) Shawn Alvarez, who was recently selected as the Regional Senior Sailor of the Year, was one of several Sailors who spoke with Ramirez at JRM.

“When someone of that caliber stops by, even to say ‘hi’ or shake a junior Sailor’s hand, it’s motivating because you get to see where they’re coming from, and you get to listen to the knowledge that they have of what’s going on in the Navy,” he said.

Seaman Philip Godfrey, of NBG, said it was a great opportunity to meet a senior-ranking Sailor and associate a well-known title with an actual person.

“It was nice to see your chain of command face to face,” he said. “Some people may feel disconnected from the people who run the biggest Navy in the world, but when (leadership) comes down here it gives you a connection to see the bigger picture.”