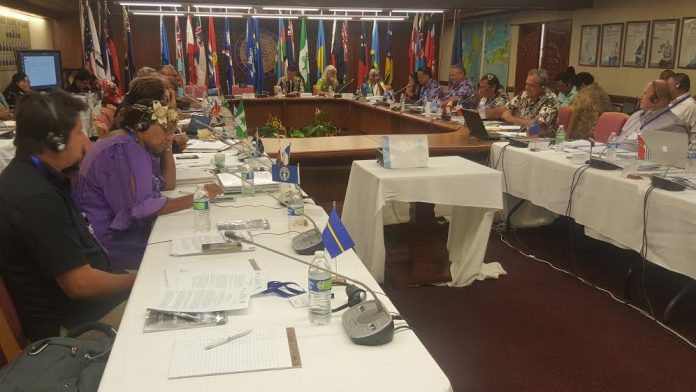 This meeting coincides with FESTPAC.

Guam – Ministers from the various Pacific Island nations held a meeting this morning at Adelup to discuss the future of culture, arts, the way of life, and tourism for their countries.

According to Pacific Community SPC, the government directors of culture and arts are upbeat about the potential growth of arts in the Pacific. The Council meeting was officially opened by Guam’s Lieutenant Governor Ray Tenorio, who emphasized the importance of the Council’s efforts to promote the indigenous traditions of our Pacific nations. The discussions included: preparations for the 13th and 14th Festivals of Pacific Arts, progress in cultural development in the region, including enhancing the cultural industries; and the mid-term review of the Pacific’s 10-year regional cultural strategy. Other key items on the council meeting agenda include Hawaii’s preparation for the 13th Festival of Pacific Arts in 2020 and Fiji’s interest in hosting the 14th FESTPAC in 2024. The participants congratulated Guam for hosting the current FESTPAC and thanked Hawaii for the substantial preparation already under way for the 13th FESTPAC in Hawaii in 2020. The two meetings are held every four years to coincide with FESTPAC.