“I want to make sure that everybody’s aware there’s some good news coming out that we may have a pill out soon for COVID treatment that will reduce hospitalizations by 50 percent,” Berg said during an interview with NewsTalk K57’s Patti Arroyo.

But Berg said he doesn’t want people to change their minds about vaccinations because vaccinations are already approved by the FDA and the CDC while the new pill is still under review.

According to Fox News, Merck plans to request emergency approval for molnupiravir after a late-stage trial indicated an approximate 50% risk reduction for hospitalization or death among patients with mild to moderate COVID-19.

Merck stated in a news release that recruitment for the study was halted early given the positive findings, with over 90% of the targeted sample size already reached, and after consultation with the FDA and an independent data monitoring committee.

Molnupiravir works by targeting the enzyme needed for the virus to make copies of itself and introduces errors into the virus’s genetic code. This curtails the patient’s viral load, shortening the duration of the illness and mitigating serious symptoms.

“More tools and treatments are urgently needed to fight the COVID-19 pandemic, which has become a leading cause of death and continues to profoundly affect patients, families, and societies and strain health care systems all around the world,” Robert M. Davis, Merck CEO and president, said in the release, adding in part, “With these compelling results, we are optimistic that molnupiravir can become an important medicine as part of the global effort to fight the pandemic.”

Dr. Berg is hopeful that Guam and the rest of the world may soon have a pill that would reduce the effect of COVID-19.

“We don’t have all the data yet, but it’s looking good. So let’s keep our fingers crossed and a prayer that that thing actually comes out. It would be very nice just to be able to take a pill and have 50 percent less admissions to a hospital,” Berg said.

He added: “So, I’m very cautiously optimistic that we’ll be able to stay steady as she goes and then slowly start to see a decline in the impact of COVID on our community.” 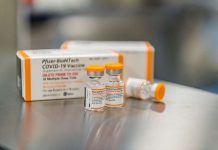