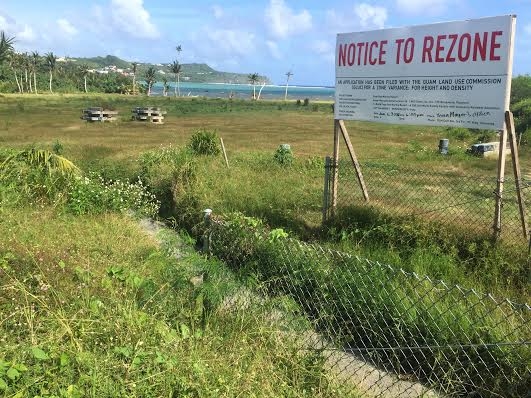 Residents nearby are concerned about environmental impacts and impacts to their overall way of life.

Guam – Residents of Pago Bay and the Chalan Pago mayor are concerned about a proposal to build two high rise condominiums in Pago Bay known as the Pago Bay Marina resort. The mayor says residents are concerned about the environmental impacts the congestion and the request for both a height variance and density variance.

The owners of the Laguna at Pago Bay Resort or the Guam Wangfang Construction LLC are planning on building two high-rise condominiums, one 14 stories the other 15 stories, right alongside the mouth of the Pago Bay river. In order to build this they have to be granted a height variance and density variance. The area is currently zoned R2 which allows for a higher density residential area but their plans call for 65 units over what is allowed.

“An R2 the other thing you have to consider it limits you to building a structure no more than three stories high, three stories high. And there’s a reason for that because even though it’s allowing for high density use it wants to limit how high you go and then if you want to go higher then you have to either get a height variance which is what the developer is asking to do is be given a height variance or your have to rezone you actually have to change the zone from R2 to an appropriate zoning and in this case it would be a hotel zone.”

The proposed development would be built on the Yona side of the divide between Yona and Chalan Pago which is why a public hearing on the request for height variance will be held in the Yona community center tomorrow(Weds) at 6pm.

Although it’s technically in Yona the high rise condos will be very close too and will impact the residents of Pago Bay. “You can’t imagine how many phone calls I’ve received since this came to light and they’re obviously concerned about the added congestion it will create,” said Mayor Gogue.

The plans call for 304 units with a parking stall for each unit. That’s a potential of 304 more vehicles pulling out into this small two lane road. However, according to the application they are targeting off-island clientele who will be residing on Guam on a “non-permanent” basis. According to the application these types of clientele don’t usually own and maintain vehicles so they don’t anticipate all of the parking stalls being used and thus don’t anticipate as many vehicles.

Mayor Gogue says residents are also concerned about the environmental impacts 32 percent of the area is a wetland, the banks of the river hold the endangered and protected Nipa Palm and the Pago Bay itself has already been strained by erosion that pours added silt into the bay. Gogue says residents are concerned about the high-rise buildings obstructing their view and changing the overall quality of life they’ve been used to for decades.

“The Campos’ the Manibusans the Balajadia’s the Perez’s there’s quite a number of families that have lived there since after the war,” said Mayor Gogue adding, “So we’re talking from the 50’s on you’ve got original families that own property in the Pago Bay still living there so when you take about 70 years of living there and raising their families there is it truly the right thing to do? To disrupt the type of lifestyle they were accustomed to?”

Mayor Gogue says he is a strong proponent of development and of growing the economy as long as it is done responsibly. According to the developers application the variances requested will not be materially detrimental to the public welfare or improvements in the neighborhood. In fact they say the public welfare will be elevated with an increase in new jobs created and an increase in economic and tax revenues for the island. They say they will remove trash and regularly maintain the property.