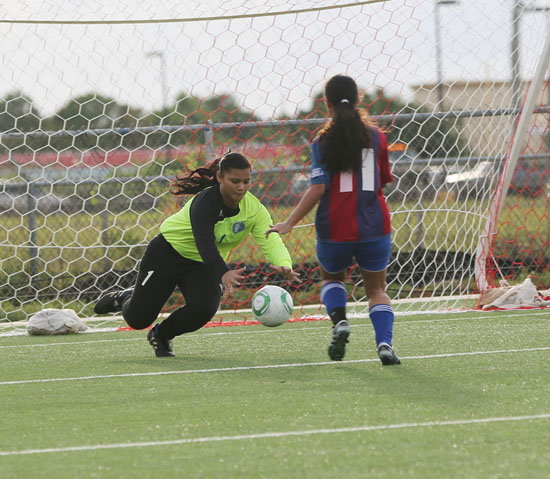 Guam – The only thing hotter than Sunday’s afternoon sun was the speed and footwork of Quality Distributors’ Paige Surber as she scored both the game equalizer and winning goal against the Paintco Lady Strykers in a match of the Bud Light Women’s 7-A-Side Soccer League at the GFA facility in Harmon.

The Lady Strykers entered the second half playing tight defense in an effort to hold onto a 1-0 advantage over Quality. Surber took advantage of the defensive aggression, drawing a foul in the penalty box in the opening minutes of play. In the ensuing penalty kick, Surber’s shot went above and behind Lady Strykers goalkeeper Sonja Sanchez into the goal to equalize the match in the 35th minute.

Ten minutes later, Surber scored the eventual game winner finishing a breakaway through the midfield. Although Lady Strykers defenders Christina Duenas and Sheena Borja tried to stop Surber near the goal, Surber was able to get her opponents off balance to open up an opportunity near the left side of the goal. Surber sent her shot to the opposite post for the final score of the game.

[Quality Distributors goalkeeper Lorraina Sanchez pounces on the ball to prevent a shot by the Paintco Lady Strykers’ Alexy Barbe (11) in a match of the 2012 Bud Light Women’s 7-A-Side Soccer League. Quality defeated the Lady Strykers 2-1]

The Lady Strykers’ lone goal came in the first half off Borja’s foot in the 26th minute of play. Borja, stationed on the right wing unmarked, connected on a pass and sent her shot toward the goal. Quality goalkeeper Lorraina Sanchez fumbled the shot and was unable to stop the ball before it rolled into the goal past the goal line.

With the win, Quality Distributors moves up above the .500 mark to 2-1. The Lady Strykers suffered their first loss of the season and drop to 2-1.

In other games, Hyundai move up to 2-0 with a forfeit win over Guam Shipyard. The dck Masters move up to 1-1 after claiming their first win of the season against Pika Soccer Club via forfeit.