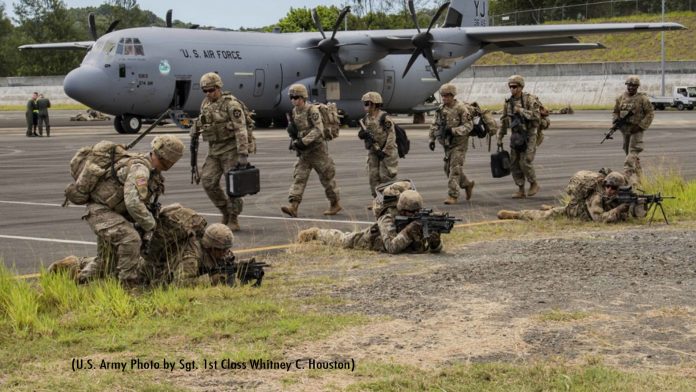 Palau – Around 150 U.S. military personnel will be in Palau from April 13 to 19 for Exercise Palau 2019, a field training and humanitarian assistance exercise under Pacific Pathways.

According to the U.S. Department of Defense, Pacific Pathways involves multinational partnerships in conducting a series of military exercises intended to increase readiness.

Exercise Palau marks the largest U.S. Army presence on Palau in three decades. Several activities are lined up for the week including community and animal health outreach services at Koror and other sites. Additionally, a local road will be repaired and widened, which leads to a training site for the Palauan Security Force’s future use.

“This exercise is a direct reflection of our commitment to the security and defense of Palau,” said Amy Hyatt, U.S. Ambassador to Palau, during a press conference held after the infantry unit’s arrival.

“…When (U.S. Navy) Admiral Philip Davidson was here, the president of Palau asked the admiral to bring more army exercises, because there hadn’t been any in decades. The next thing we know, Pacific Pathways’ exercise locations included Palau as one of their training sites. So Admiral Davidson was good on his word, and the Palauan people are happy to have the (U.S.) Army here,” Hyatt said in a release from the military.

During their arrival, military personnel demonstrated how to secure an airfield in collaboration with the Palauan Security Forces. This was the first of many training exercises to be held throughout the week.

“The securing of the airfield that you see here was done with the collaboration of Palauan Security Forces,” said Lt. Col. Douglas Graham, who serves as commander of the 5th Bn., 20th Inf. Reg., 1-2 SBCT, 7th Inf. Div.

“Over the next week we’ll conduct many more training events like this, and we’ll be looking at training areas that will benefit both U.S. and Palauan Forces in the future,” Graham added in the release.

Three enlisted soldiers from Palau are also participating in the exercise. According to the military, the citizens of Palau under the COFA agreement have been able to join the U.S. Armed Forces and have been heavy contributors in U.S. foreign campaigns.

“It’s humbling to know that soldiers from Palau enlist at a greater rate than almost any other state,” Graham said, “and that seven have sacrificed their lives in the last decades keeping their fellow man safe and free. It’s an honor to serve with the likes of our Palauan soldiers here.”

The exercise contributes to and strengthens U.S. and Palau relationships and reinforces U.S commitments to the Indo-Pacific treaty and alliance, according to the U.S. Embassy in the Republic of Palau.