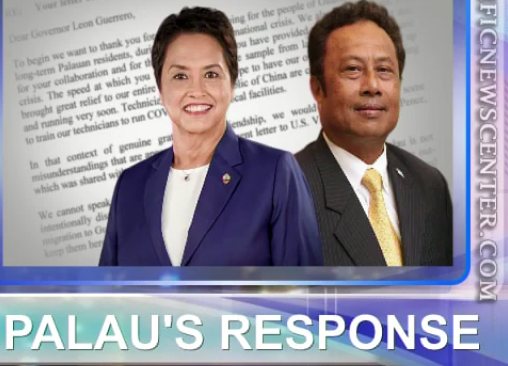 Palau President Tommy Remengesau Jr. has cleared the air with Guam Governor Lou Leon Guerrero regarding the request made by the governor earlier this month to the federal government to curb the movement of citizens from the Freely Associated States into Guam during the COVID-19 pandemic.

In a letter dated April 9, Remengesau Jr. clarified that it has never been Palau’s purpose or intention to send any Palauan to Guam during the pandemic and that all flights — except weekly mail and cargo flight — have already been suspended.

However, Remengesau Jr. did mention the 20 Palauans who were stranded on Guam and the government’s efforts to bring them home to Palau via a chartered flight.

“It seems the source of this misunderstanding may be our proposed charter flight which you reference in your letter to Vice President Pence and the COVID-19 Task Force. It is true that Palau is looking into chartering a flight from Guam to Palau. However, the purpose of this flight is to bring Palauan citizens from Guam to Palau and not the other way around. These citizens, approximately 20 in number, were stranded on Guam by the cancellation of United Airlines inbound service, ad decision that was made by United Airlines due to low load factor,” Remengesau Jr. said.

He said the Palau government is looking at all options to get the stranded Palauans home as soon as possible. “For this reason, we have gone to great effort to establish emergency quarantine facilities and are trying to arrange expensive charter flights to Palau,” he said.

“To our knowledge, no passenger of any nationality has traveled from Palau to Guam since March 26,” he said.

He wrote: “We cannot speak for the other Freely Associated States but we assure you that Palau is not intentionally disallowing its citizens to return home, nor is it encouraging or facilitating outmigration to Guam or any other U.S. jurisdiction. It is our policy to get Palauans home safely and keep them here.”

The Governor sent a letter to U.S. Vice President Mike Pence on April 6 asking “the COVID-19 Task Force [to] provide guidance to the Departments of State, Homeland Security, and Interior to intervene on the matter of continuing travel from the Freely Associated States to Guam.

Aside from Palau, the FAS nations include the Federated States of Micronesia and the Marshall Islands.