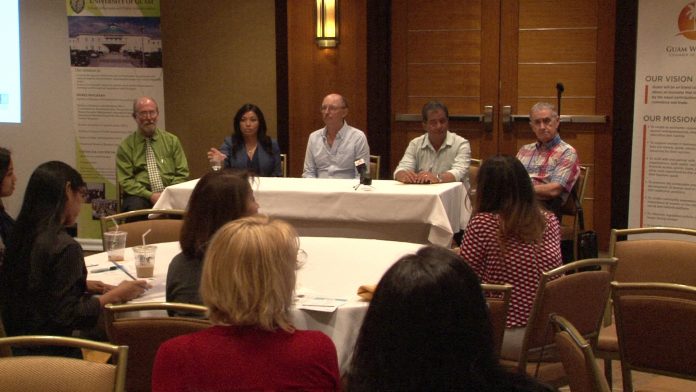 Several people within the business community spoke about the possible impacts another minimum wage increase could have on the economy and small businesses.

Guam – The minimum wage was the hot topic at a Guam Women’s Chamber of Commerce forum today. Many representatives within the business community spoke out against the raising of the minimum wage, which is currently at $8.25 an hour.

The Guam Women’s Chamber of Commerce held their second Wage and Compensation Forum wherein a number of stakeholders and economists presented on the topic.

After their presentations was the question and answer portion. But instead of questions, some within the business community presented their own ideas about the impacts another minimum wage increase could have.

“We saw the [consumer price] index reduce and some people have used that as an argument to say, ‘See, we raised the minimum wage and CPI went down, so it didn’t affect anybody.’ Well we know CPI went down because fuel costs went down. That’s the driving factor,” says Jeff Jones, president of Triple J Enterprises.

“For every dollar an hour that minimum wage goes up, it’s an additional $2,000 per year that the small business has to carry, or actually more than that if you think about the tax side of it,” he explains.

“Even though employment increased last year, the question is if the minimum wage had not been increased, how many more jobs would have been created,” he adds. “If there is a minimum wage increase, one of the things we should consider doing is looking at some kind of exemption for young workers so that they can actually get into the workforce and get some experience.”

“The farmers themselves–and this is what’s happening, and I hope I don’t get anyone in trouble–they’re not hiring as employees anymore. What they do is they go pay them a set amount of $50 to go do a particular field. And if they get caught, they get caught. They’re taking their chances right now,” says Paulino. “They’re not paying any taxes, they’re not paying any regular wage … if we were to do things legally and follow the law of employment I would be priced out.”

He adds: “So a group of guys, not necessarily local, but people from off-island, they said we use them because they don’t talk, they don’t complain, they come in, they work the fields and they get $50.”

“It is about balancing. Because as we look at growth in our region. Yes we have higher tourism arrivals but we have different markets that are coming to us. They’re not spending as much,” says Rhodes.

Vice Speaker BJ Cruz says he plans to introduce another bill to increase the minimum wage if the economic impact study on the last minimum wage increase is not completed by the legal deadline of April 30.