Guam – Senator Ben Pangelinan  has sent a letter to Governor Calvo urging him to give the timely payments of income tax refunds more than lip service.

His public statements touting the importance of timely payment of income tax refunds that were budgeted in the Annual Appropriations Act of 2011 and for which the cash to pay the refunds have been collected are not being supported by action.

The letter informs the Governor that there are approximately 35,154 “A” status returns amounting $54,844,914 sitting idle, waiting to be paid which include Make Work Pay Credits, at the Department of Revenue and Taxation. “These individuals and families have been waiting years, for their tax refunds. Governor Calvo must prioritize the payments of tax refunds to the people of Guam. The Legislature has set this priority in the 2011 Budget Act passed by the Legislature,” says Pangelinan.

“It appears that the Calvo administration’s actions speak louder than words. I have reviewed official documents provided by the financial professionals of the government of Guam, and his administration has shortchanged income tax refunds payments to taxpayers by roughly $15.2 million,” stated the Senator.

“These refunds are budgeted and actual revenue collections are above estimated revenue projections by $2.6 million. I would like to remind Governor Calvo that the non-payment of income tax refunds not only harms our taxpayers, businesses, and economy, but places the government of Guam in a precarious position of possible legal action against the government by our taxpayers.” 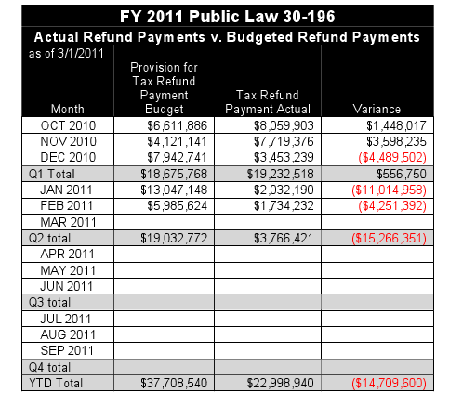