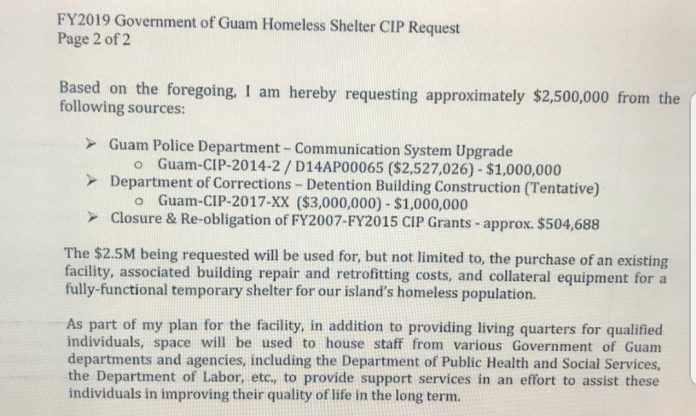 Guam – Relief is on the way for the island’s homeless population, as the Governor’s Office announces a $2.5 million dollar capital improvements project to buy a suitable building and convert it into a homeless shelter to help get unsheltered people off the streets in the wake of September’s Tyhpoon Mangkhut.  But in this era of fiscal belt tightening, where’s all that money coming from? The final answer could arrive in the form of unannounced financial shuffling.

On Sunday the Governor’s Communications Office proudly trumpeted the approval of the much-needed shelter.

A press release reads, in part:

“Continued efforts to reach out to federal leaders has allowed for funding for a fully functional temporary shelter for the island’s homeless population.”

In an email to  island media, the communications office also shows Gov. Calvo on the phone with Vice President Mike Pence on September 14th, asking for the thumbs up for assistance following Typhoon Mangkhut’s violent pass through Guam.

“I’m hoping we can get some help from this administration. I know you’re committed to working with the states and territories,” Gov. Calvo told Pence.

“I think you’re gonna be dealing with the aftermath there, but, again, we rejoice that there was no loss of life,” Pence told Calvo.

So one month later, the Governor’s Communications Office is now heralding the Department of the Interior’s approval by furnishing a copy of the approval letter from DOI International Affairs Assistant Secretary Doug Domenech. But the accompanying press release leaves out a fact the public might like to know. Where exactly did that $2.5 million in federal funding come from, anyway?

The broken paper trail PNC has been piecing together indicates it may have come from here:

This document suggests that Adelup is transferring millions of dollars from the pre-approved replacement of critically needed public safety infrastructure. The failure to mention it to the public raises the question “why?” Is it because the administration fears public reaction to the transfer? And is the concealment worse than the shell game?

The unpublished letter is indeed addressed to “Assistant Secretary Domenech”. And its last segment is signed by “EDDIE BAZA CALVO, Governor of Guam”. The wording suggests a reprogramming request of $2.5 million dollars in Interior CIP funds already earmarked for GPD and DOC.

The same excerpt requesting the money transfer spells out how the Office of the Governor intends to spend it.

The $2.5 million being requested will be used for…a fully-functional temporary shelter for our island’s homeless population.

“…please note that the aforementioned request is in addition to my Office’s September 17, 2018, request of $1.5M in FY2018 Technical Assistance Program funding support for the aforementioned displaced persons due to Typhoon Mangkhut. This is in line with our long-term plan to have two (2) facilities, one in northern Guam (in Dededo or Yigo) and one in central Guam (in Hagatna) where most of our island’s homeless and displaced persons reside.”

Is the Calvo Adminstration being completely above board with the transfer and the reprioritization of federal funds? Or is the failure to mention the transfer merely an oversight?

Whatever the case, Gov. Calvo was encouraged enough by his  conversation with Vice President Pence to do something about Guam’s growing homelessness. “We appreciate your leadership. We’re so proud — we’re so proud of Guam,” Pence told Calvo.

UPDATE: Governor’s Office Spokeswoman Oyaol Ngirairikl has confirmed the transfer described in this report and has provided an unbroken copy of Gov. Calvo’s request letter to Assistant Secretary Domenech.

The images, below, show the original request letter and the Dept. of Interior’s response. 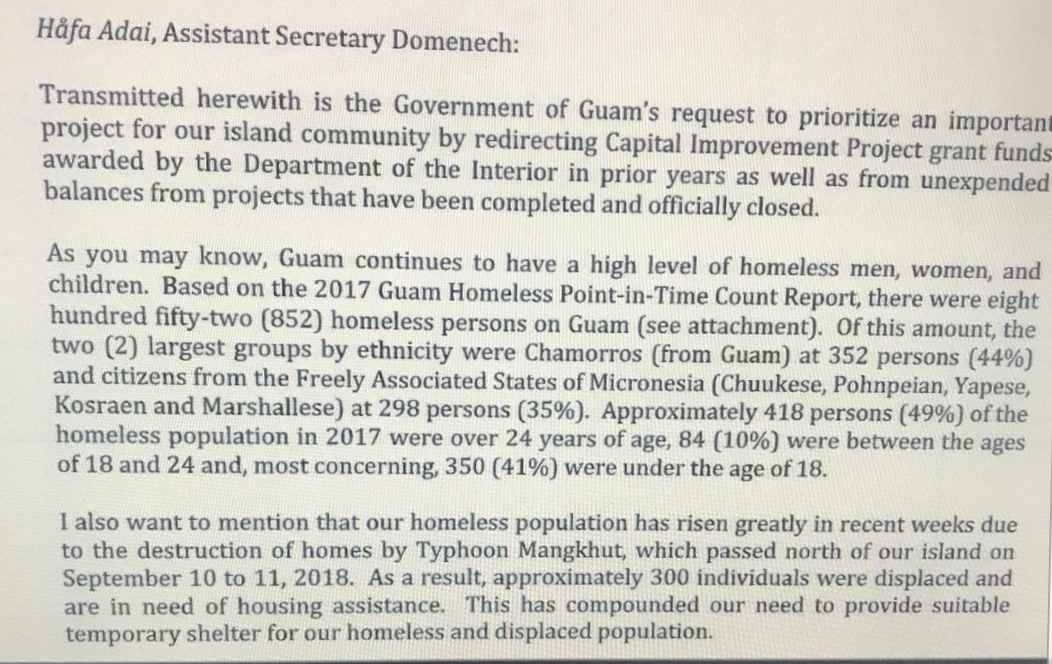 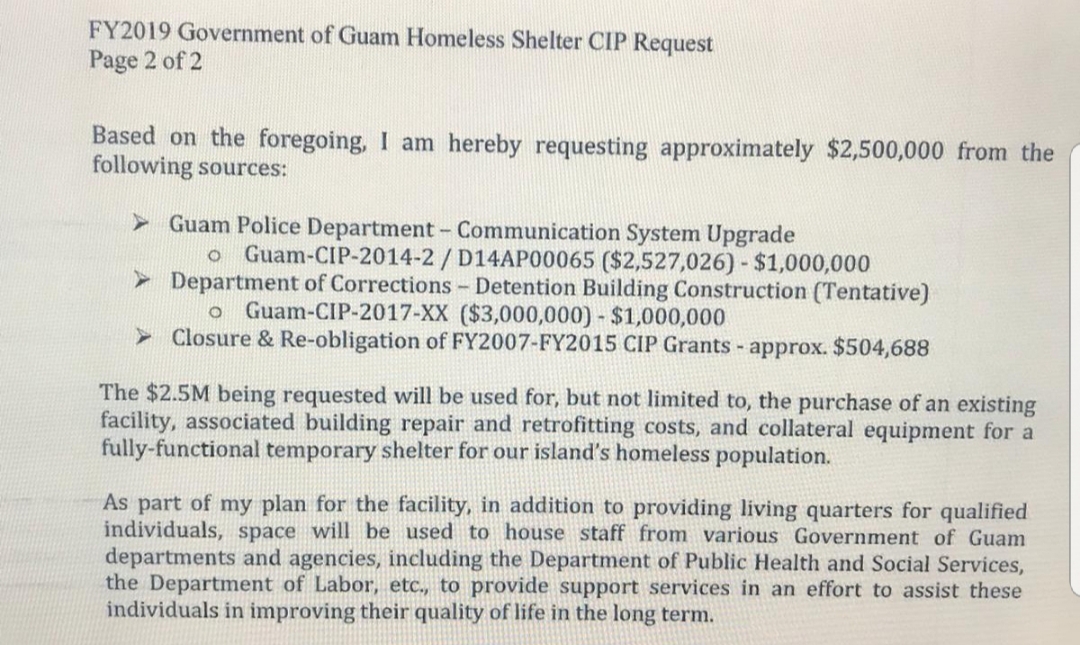 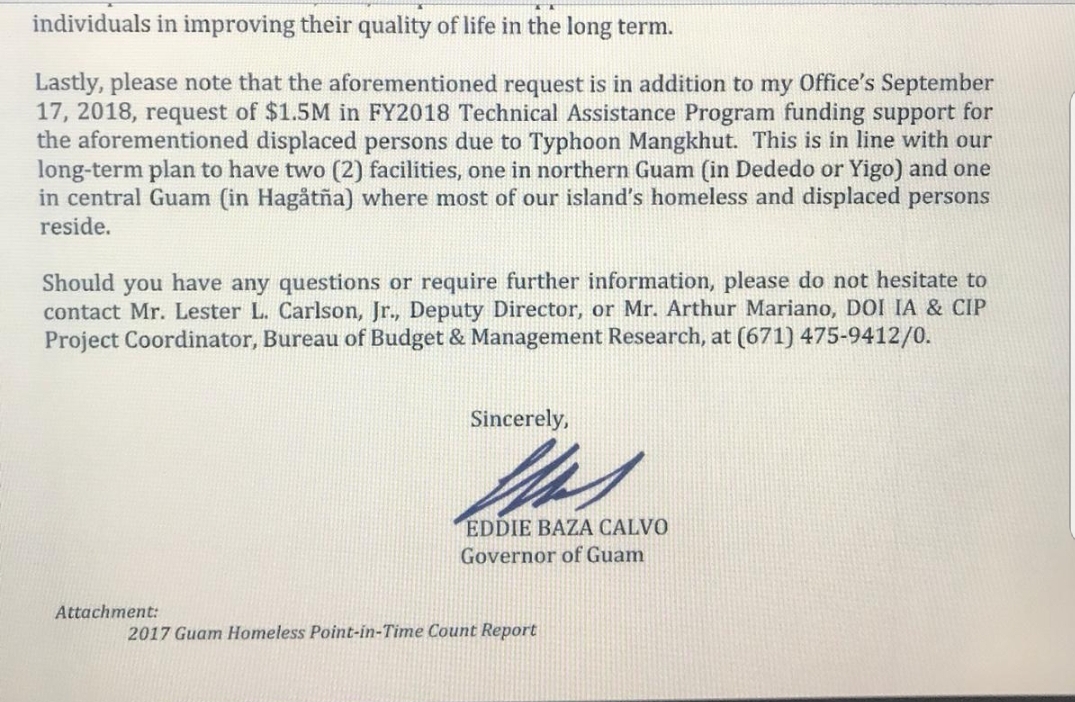 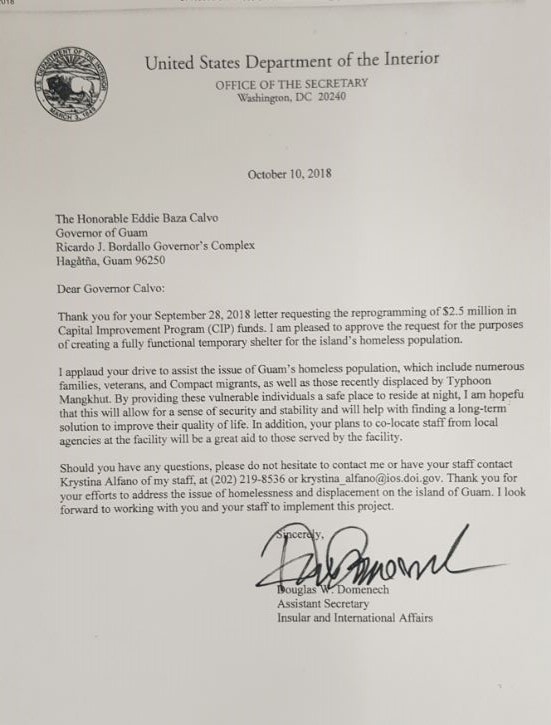