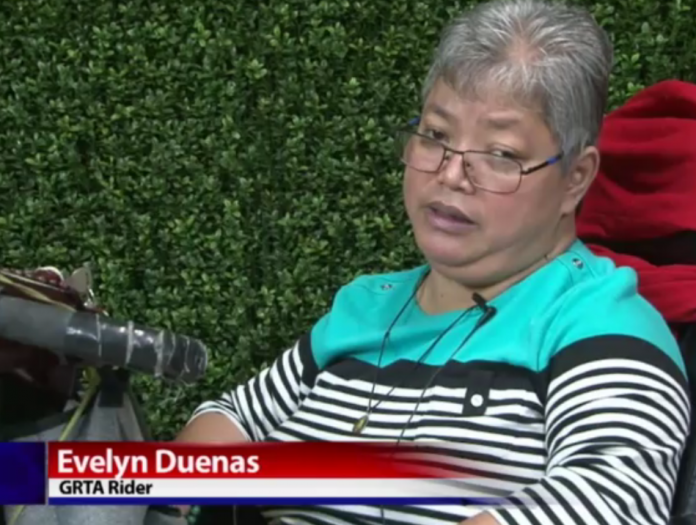 Guam – Having a safe and reliable means of transportation is a struggle for many local residents, most especially those who rely on public transportation. And, unlike vehicle owners, those who utilize the Guam Regional Transit Authority’s services are at the whim of those running the operation. This appears to be the case for one para-transit rider whose riding pass was suspended after her attempt to solve a problem with a GRTA vehicle.

Evelyn Duenas has been a transit rider with the Guam Regional Transit Authority for over a decade. In all her years she has never had her pass revoked, until a recent incident during which she touched a piece of equipment on the transport vehicle when the ramp jammed.

Duenas tells PNC that she was picked up at the Micronesia Mall around 4 PM to be transported to the Church in Yona. Though that leg of the journey went without a hitch, a problem arose around 6 PM regarding the van’s ramp. Duenas says the platform utilized to lift wheelchair-bound riders in and out of the vehicle had jammed. In an attempt to fix the problem, Duenas touched the passenger control button, a mechanism intended to allow passengers to be more independent. However, GRTA’s policy prohibits passengers from touching any of the equipment.

Because she touched the switch, Duenas was blamed for the malfunction. For nearly two hours Duenas had to wait in the vehicle before she was physically removed. But the unassuming passenger knew more than she let on, revealing to PNC that she had been present during the vans’ unveiling to the community. During the presentation Duenas learned from Fukuda Enterprise how to operate the ramp manually. Unfortunately when she tried to put her knowledge to use, she was met with hostility.

Duenas also says there were no signs indicating “do not press the button.” GRTA’s response was that she should’ve known. Without due process, the public transportation provider slapped their faithful traveler with a week-long suspension for tampering with a government vehicle.

But a broken-down ramp isn’t the only issue faced by GRTA. Duenas says the system as a whole is broken and that she has been requesting information from GRTA through the Freedom of Information Act. The longtime commuter believes that her suspension was pre-meditated and connected to her queries to the institution. Duenas tells PNC that she had been warned in the past that she would be suspended — prior to her button-pushing incident. To top it off, she was never provided the opportunity to appeal the suspension.