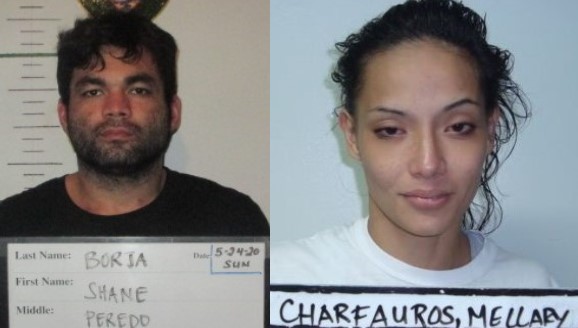 The Guam Police Department has charged a mother and father with four counts each of child abuse, after finding their children living in dismal conditions last weekend.

Police say that at around 12:30 p.m. on Sunday, officers stopped a vehicle at a residential location in Yona in relation to a vehicle-theft complaint.

The woman inside, 26-year-old Mellary Rae Charfauros, indicated that she lived at that residence, which was a collection of shipping containers in a dilapidated state, according to one of the attending officers.

That prompted the officer to head inside the home where he said he could see and smell trash and human waste inside the containers, and there did not appear to be running water or clean water on-site.

He found one single mattress in the home, supported by bricks.

The officer found four children covered in dirt with soiled clothing, who hadn’t eaten all day.

The officer also found absolutely no food or water on the premise for the hungry children. Charfauros, the mother, admitted to the officer that there was no food to feed the minors.

The four children ranging in age from 6 years old to a 1-year-old, were taken to the local police station along with their mom to be interviewed.

The attending officer bought food, soap, and diapers for the children, who were then cleaned up and fed. The minors were given additional clothing donated by an officer’s family while at the police station.

The father, 31-year-old Shane Anthony Peredo Borja, was also located and brought to the station for questioning on the children’s living conditions.

Both Charfauros and Borja admitted that the living conditions are not suitable for children. The two have been charged with four counts each of child abuse and four counts of failure to provide.

Police say the mother, Charfauros, admitted to using drugs while the father, Borja, had a history of drug possession.

The four minors, a 1-year-old, 2-year-old, 3-year-old, and 6-year-old, are now in the care of Child Protective Services.